Summer on the 'Coke side of life' in London 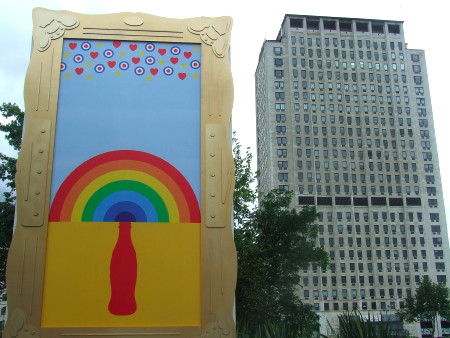 Sir Peter Blake has been commissioned by Coca-Cola to create a stunning piece of pop art celebrating summer on the South Bank.

Sir Peter and his team will spend one week creating a 20ft high work of art, live on the north-eastern corner of Jubilee Gardens.

"Working with one of the most famous and iconic brands in the world gives me the opportunity to bring my art to more people and create an original piece of work that people can experience and enjoy," says Sir Peter Blake.

"The South Bank is traditionally one of London's most lively and creative areas during the summer and having used 'Coke' imagery in some of my previous work, the whole project felt like a really natural fit. Who knows, the sun may even come out as we're creating the piece!"

Coca-Cola is inviting people to head to the South Bank to be a part of this event and witness one of the world's leading artists at work.

Sir Peter will use the iconic Coke bottle and the 'Coke Side of Life' theme as the inspiration for the artwork with the piece taking the form of a image emerging from the neck of the bottle.

The finishing touches to the artwork, including Sir Peter signing the piece, will take place on 23 August. The artwork will remain on the South Bank for the rest of August.

Coca-Cola is also sponsoring temporary installation of artwork by designers such as Vault 49 and Adhemas (Brazil). A total of 14 designers will have their interpretation of summer on the 'Coke side of life' displayed as part of this gallery alongside Sir Peter's artwork.

Coca-Cola is also sponsoring the Andy Warhol Season at BFI Southbank throughout August and September.