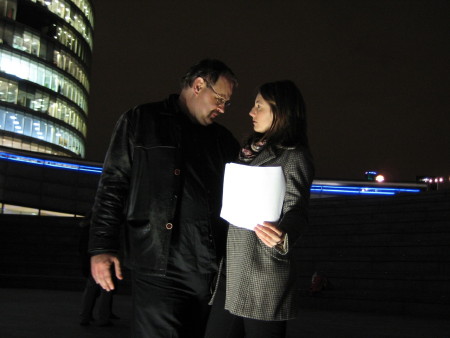 Bardathon is a 24 hour Shakespeare marathon featuring 15 popular plays and sonnets performed by over 40 professional London-based actors. Five teams of actors have only 12 hours prior to the event in which to rehearse and prepare three plays each.

With no set, few props or costumes, Bardathon will rely on the magic of the language to capture the imagination of the audience. Actors taking part are sponsored by their local community.

Money collected after the event will go toward production costs for a re-interpretation of A Midsummer Night's Dream and a new play exploring the plight of black Germans during Hitler's rise to power.

Bardathon is free and aimed at story lovers of all ages. Audience participation is encouraged in reading favourite sonnets, commenting on the action and taking part in scenes.

The live action will be hosted by Jonathan Hansler and Jackie Stirling aka eccentric comedy duo Teak Show fresh from a successful run in Edinburgh.

SE15-based Word of Mouth Media Productions was formed in 2000 by Drama Centre graduates and aims to create affordable, high quality theatre that is provocative and relevant to a modern audience.

Bardathon is the brainchild of artistic director Diana Thomas in response to arts funding cutbacks. While the Arts Council continue to confine classical theatre funding to the RSC whose ticket prices rarely fall below £20 and many smaller companies forced to become inactive it is necessary to come up with new and interesting ways in which to finance new projects.