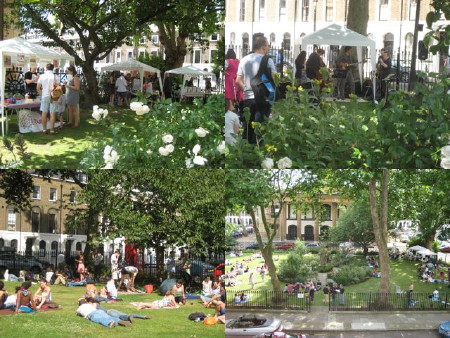 Trinity Church Square: The garden, maintained by Trinity House, contains one of the oldest outside statues in London, probably of Alfred the Great and possibly originally sited in Westminster Hall. The garden has been open to residents only since 1997 and has been well used since the closure of Trinity Street to through traffic in 2002. The beds were replanted in 2000 under the supervision of the Garden Museum.

Merrick Square: Small, quiet, well-maintained garden square with interesting shrubs, originally laid out in 1853-6 as part of the development of land belonging to the Corporation of Trinity House. It is still composed of 32 single houses, owned by Trinity House. Holy Trinity Rectory, between Nos. 16 and 17, was built in 1872. The central beds were replanted in 2000 under the supervision of the Garden Museum.