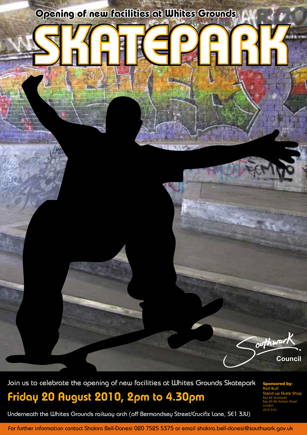 Whites Grounds Skate Park is hosting a launch party for the opening of the new facilities that have been installed.

Music, giveaways and much more will be available at the event. A skate competition will also be held on the day.

The event is organised by Southwark Council and supported by Red Bull and independent media company Myvirtuousmedia and Stand Up Skate Shop.

The new facilities will be formally opened by Cllr Anood-Al-Samerai.

The skate park was originally funded by section 106 funding from the More London development and was completed in 2007.

Since 2007, additional section 106 funding has been invested in the skate park to provide further improvements to the park. Southwark Council and Forge Architects have worked together to provide additional facilities.

The skate park now benefits from an additional skate ramp, kitchenette, WC and office space/ repair shop which has been installed in the side arch available for skate park users.