The Cuming Museum has become the owner of a rare photo of the Elephant and Castle that was taken in the 1940s by Bert Hardy, thanks to a grant from the National Art Collections Fund. 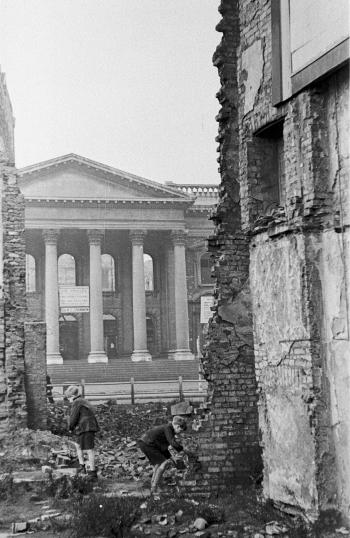 The photograph, which is titled "A Ghost Strayed from Old Greece" captures an image of bomb damaged Elephant and Castle during the Second World War. It shows local children playing among ruins on the spot where the shopping centre stands today.

Bert Hardy was commissioned to photograph London during the Blitz, and this photo forms one of his most famous series of images which focused on the Elephant and Castle. It featured in the Picture Post magazine on 8th January 1949 in a story titled "Life in the Elephant".

The picture was captioned "Corinthian pillars in a Hogarthian slum. In the burnt out Metropolitan Tabernacle, Victorian preacher Spurgeon raised his warning voice on Thursdays and Sundays."

Last month the image was on display as part of an exhibition of Bert Hardy's work at James Hyman Fine Art.

"We're delighted to add this image to our collection" says Catherine Hamilton, collections and museums manager at the Cuming Museum. "This image tells us a lot about that point in history – which building used to be where the shopping centre is today, what children were wearing and doing at the time. It will be a real asset to our collection and we hope it will attract even more people to come and re-live a little of Southwark's history".

The Cuming Museum is interested in capturing stories from people in London who remember the area during the Second World War, so if you have a story you'd like to tell call 020 75252163 or email [email protected]