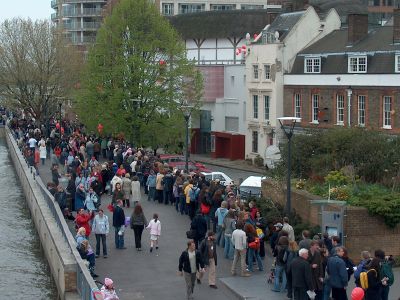 Queues for the event at the Globe stretched back to the Millennium Bridge.

Once again the Mayor of London provided funding for a free family event at Shakespeare's Globe to mark St George's Day through a celebration the contribution of Shakespeare to world culture.

The festivities included opportunities for the public to step out on the stage, free admission to Shakespeare's Globe Exhibition, displays, fun and games.

The results of an online poll carried out on the Shakespeare's Globe website have revealed that 67 per cent of the public claim they know the story of St George and the Dragon. 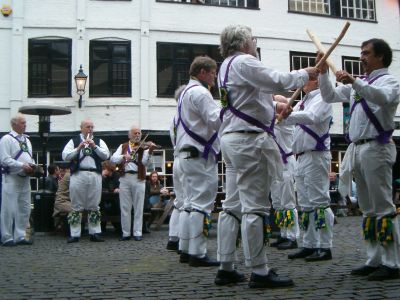 The East Surrey Morris Men conducted a St George's Day tour of Southwark, starting in Colombo Street off Blackfriars Road and proceeding to the George Inn in Borough High Street via Doggett's Coat and Badge, the Founders Arms and the Anchor Bankside. 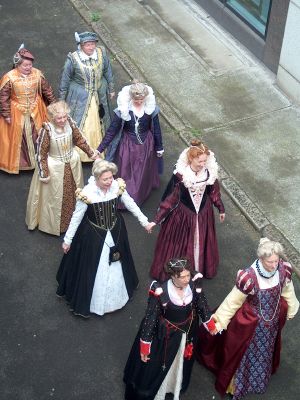 The Renaissance Dancers perform opposite the Rose Theatre site in Park Street.

The Rose , Bankside's first theatre, was also the centre of much activity. The Southwark-based Renaissance Dancers performed in Park Street, and inside the Rose Theatre Exhibition William Sutton performed his sonnet marathon for the second time, reciting all of Shakepeare's 154 sonnets from memory.

In the afternoon protesters marched across Westminster Bridge to demand compensation for workers who lost their pensions when their companies went bust. About 70 people turned out for the march from St Thomas' Hospital to the Houses of Parliament which finished with speeches at the St Stephen's entrance. Pension Action Group spokesman John Hayter said the theme was St George "fighting for pensions and justice". 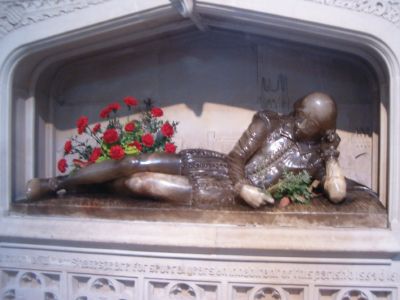 Bermondsey-born comedian Arthur Smith and Rick Jones marked William Shakespeare's 441st birthday at Southwark Cathedral with a celebration of the brief, tragic life of his younger brother Edmund with lute songs and speeches. 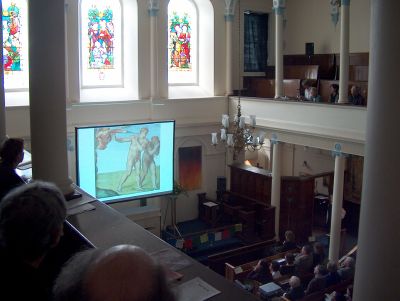 Time To Be Real at Guy's Chapel

Meanwhile Guy's Chapel was packed for the launch of the Southwark-based Mental Fight Club with 'Time To Be Real', an audio-visual presentation of the first section of Ben Okri's epic poem Mental Fight. The organisation, brought together by local resident Sarah Wheeler, has taken St George as one of its patrons.

The church of St George the Martyr in Borough High Street rounded off the day with Evensong to mark its patronal festival, followed by an evening of Victorian entertainment to celebrate the 150th anniversary of the publication of Little Dorrit. The church features prominently in Charles Dickens' novel.

Meanwhile Globe Education's director Patrick Spottiswoode was in Staunton, Virginia for the launch of the American Shakespeare Center, a new national national venue for the study and performance of Shakespearean works for actors, directors, scholars and enthusiasts in the United States.

The centre boasts a recreation of Blackfriars Playhouse, Shakespeare's indoor theatre which stood across the river from Bankside. Dame Judi Dench has remarked that the replica "ought to be in England."