A 48-storey tower is being proposed for a site next to the National Theatre as part of a development which will include a much-anticipated swimming pool for local residents. 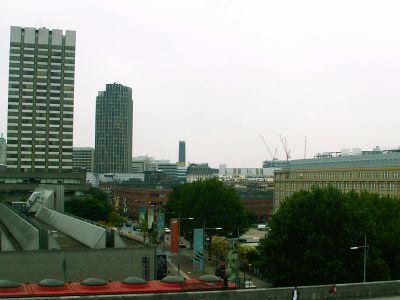 Coin Street Community Builders revealed detailed plans for the high-rise development at a meeting of the South Bank Forum.

The site, bounded by Upper Ground, Doon Street and Cornwall Road, will include a public swimming pool, indoor leisure centre and the Rambert Dance Company's headquarters.

The tower containing market rent flats is planned for the east end of the development to avoid overshadowing the Hayward Gallery and the White House. However, architects concede that the tower's height would breach the protected view south from St James's Park bridge, also a point of controversy for Beetham's planned 68-storey tower in nearby Stamford Street.

For comparison, nearby Kent House (the London Television Centre tower) has 27 storeys.

The development has been designed by Lifschutz Davidson Sandilands, who also converted Oxo Tower Wharf and added the Golden Jubilee Bridges to Hungerford Bridge. Ian Davidson, who worked on early designs for the site, died in 2003. The practice's other local work includes Bermondsey One Stop Shop in Spa Road and the forthcoming redevelopment of the former Presbyterian chapel in Borough Road for London South Bank University.

Southwark Street-based Allies and Morrison are responsible for the Rambert Dance Company building.

The pool and leisure centre will be run by Greenwich Leisure Limited, a staff-led 'leisure trust', which has announced discount admission prices for local residents. Rambert Dance Company has also announced an extensive events programme for children living nearby.

• There will be a consultation exhibition for the scheme at the Oxo Tower Wharf information centre from Monday 10 to Sunday 30 October.