Magazine publisher IPC Media has announced that its new Southwark Street HQ - until now known as Bankside 1 - is to be named The Blue Fin Building. 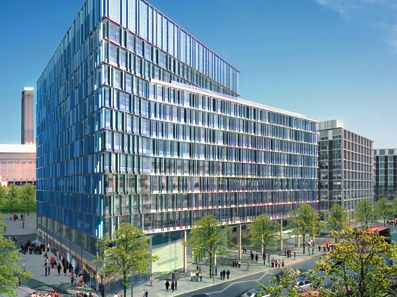 The name – selected following a staff competition which attracted more than 300 entries – refers to the 2,000 blue aluminium fins that cover the building's facade.

The fins, manufactured in Poland, have a metallic finish that changes the building's appearance when viewed from different angles. Specifically placed to reflect the sun at different parts of the day, the fins will provide constant shade inside the building.

Designed by award-winning architects Allies and Morrison, whose offices are opposite the development, IPC claims that The Blue Fin Building will provide an "architectural statement" to match Tate Modern.

The building will be occupied by IPC – and parent company Time Warner's other UK businesses, Time Life International and Time Warner Book Group – from April 2007. A topping out ceremony was held last September.

"I believe we've chosen a name that not only describes the building's unique appearance, but one that will also be memorable to everyone, from visitors to taxi drivers," says chief executive Sylvia Auton. "The building has many amazing and distinctive design features – the blue fins are without doubt the most eye-catching, and make it instantly recognisable."

Allies and Morrison architect Tim Makower adds: "The shadows and reflections created by the fins change shape and direction as the sun moves around the building, marking the time of day in a dynamic way, like a sundial."

The building has a central atrium so spacious that IPC's current headquarters, King's Reach Tower on Stamford Street, could fit inside it. Time Warner businesses will occupy ten of the 12 floors with around 65,000 square feet being leased through Savills on behalf of IPC.

The Blue Fin Building is part of Land Securities' Bankside 123 development. IPC agreed to buy Bankside 1 in May 2004 and in May 2005 the developer announced that it was pressing on with Bankside 2 and Bankside 3 on a speculative basis.

The south-eastern corner of the Bankside 123 site – formerly occupied by St Christopher House – is due to feature a new home for the Architecture Foundation designed by Zaha Hadid.