The South Bank Centre and the London Eye have announced that they have finalised and signed terms on a new 25-year lease agreement. 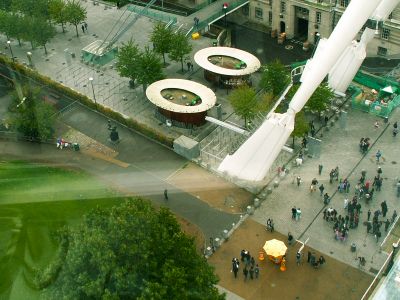 The lease secures the future of the London Eye on its South Bank site as the world's largest observation wheel and the UK's most popular paid for attraction.

In a joint statement the two bodies say that terms of the lease agreement – which is based on a percentage of turnover, with a guaranteed minimum of Ł500,000 pa to the South Bank Centre – will "act as a stimulus for longer-term collaboration on cultural development on the South Bank".

Last summer the two attractions were locked in an extraordinary public dispute which led to questions being asked in Parliament and MPs signing an early day motion.

The dispute centred on the rent for the small portion of Jubilee Gardens leased from the SBC for one of the observation wheel's supports.

Lord Hollick, chairman of the South Bank Centre said: "The South Bank Centre is delighted to have achieved the fair commercial rent it hoped for. The new rental agreement is a huge boost not only to our Ł91 million refurbishment of the Royal Festival Hall, of which just under Ł10 million still remains to be raised, but also to the future funding of our artistic and educational programme over the long term. We are delighted to welcome The Tussauds Group as a key strategic partner on the South Bank."

Peter Phillipson, Chief Executive of The Tussauds Group, which operates the London Eye, said: "The Tussauds Group is very much looking forward to developing its strategic relationship with the South Bank Centre. There are many development opportunities which have the potential to greatly enhance the experience we provide for our customers."

Last year British Airways announced the sale of its stake in the London Eye to Tussauds Group, though the attraction will continue to bear the airline's name.

Martin George, British Airways' commercial director, said: "Completion of the deal helps cement the future of the Eye as one of London's icons. British Airways has supported the Eye for nearly a decade and we are delighted to continue to support it through the extension of our existing franchise agreement."