Borough Market has revealed more details of its plan for a 'food school' at a seminar for members of Better Bankside's Business Club. 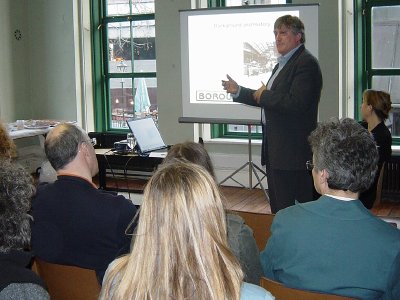 Market chief executive Simone Crofton spoke at the seminar held at 1 Cathedral Street, the building destined to be the Food Centre of Excellence.

Simone Crofton said that the Centre would promote healthy eating and offer courses on how to cook at home for children using seasonal menus. There would be a classroom for use by Southwark schoolchildren as well as local groups.

She reminded the audience that La Boqueria Market in Barcelona, soon to be twinned with Borough Market, already had a food school. The one in Southwark would be self financing with a cafĂŠ and a boookshop.

Earlier chair of the market trustees George Nicholson, giving an outline of the market's 250 year history, stressed that Borough Market was locally inspired and still run by parishioners. He outlined the serious post war wholesale decline caused by supermarkets which led to a crisis in 1995 followed by rebirth and dramatic growth from 1998 as a retail food market.

George Nicholson also described his role in securing the Floral Hall portico which once stood in Covent Garden but was rescued from storage in Wales and bought by the Market for Ł1.

During the reception, Business Club members were able to enjoy the views from the Food Centre's first floor studio of both Southwark Cathedral and the soon to be refurbished market building on the corner of Winchester Walk. Refreshments were provided by well-known market traders Brindisa and Utobeer.