A project run by and for young people in Waterloo is celebrating its new status as an independent charity after three years of SRB funding. 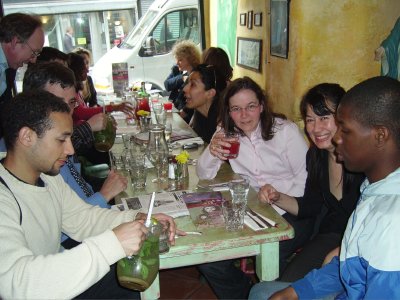 Abigail Tripp (chair) and Natalie Bell (director of projects) with members and supporters of SE1 United at a celebration event held last week at Cubana.

SE1 United was established in April 2003 and set up with funds from the Single Regeneration Budget (SRB) through the Waterloo Community Regeneration Trust. A group of eight young people aged 12 to 16 years old wrote a business plan and presented it to the WCRT board who granted the project Ł230,000 over 3 years. The pilot project has been hosted and supported during the three years by South Bank Employers' Group.

To enable SE1 United's work to continue after the end of SRB funding, the group has established itself as an independent charity. "It's really exciting for us and the young people to know that SE1 United is going to carry on even though the SRB money has finished," says director of projects Natalie Bell. "We are also moving into Living Space, where we run our study sessions from, and look forward to working with them to open up the building more for young people."

The programme is steered and put together by the youth committee (17 members) who meet at least once a month and volunteer to deliver the youth led activities which range from the SE1 United quarterly newsletter to the annual sports day, personal safety workshops for young people to the summer radio station. The activities fall under four themes and are delivered after consultation with a wide range of young people to ensure that they meet needs and aspirations.

At present SE1 United employs two members of paid staff, ten local session staff and over 30 regular volunteers. It has a trained board of trustees (of which half of the members are under 21 years of age) and hosts and works in partnership with the Waterloo Youth Steering Group (30 members from local organisations).

More than 70 per cent of SE1 United users are from black and minority ethnic (BME) backgrounds and aged 11-18 years old living in the boroughs of Southwark and Lambeth. The project reaches over 1000 young people a year and all young people living in Waterloo aged 10 to 21 years are automatic members invited to come to large scale events and access free youth support and advice.

SE1 United aims to improve the lives of 10-21 year olds through facilities, educational events and activities led by young people and provide a voice for young people nationally, primarily in the boroughs of Lambeth and Southwark. The charity is currently fundraising and seeking long term partnerships which will support future activities.

The Earl of Normanton is a patron of the group. Members of SE1 United enjoyed a day of clay pigeon shooting on the Earl's estate arranged by Kate Hoey MP. He was so impressed by the group that he immediately agreed to support its future work.