The City of London's churches and livery companies have been maintaining the ancient custom of confirming its boundary with Southwark. 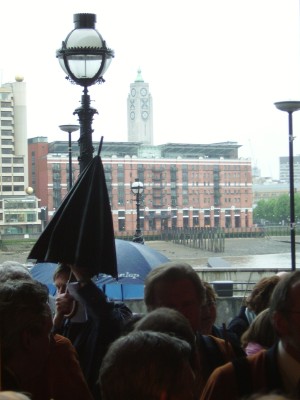 Ascension Day on Thursday 25 May and the previous four days, known as Rogation days, is a traditional time for the annual beating the bounds.

However, plans by the Vicar and parish of St Bride's, Fleet Street to take to the water for the first time to beat its mid-Thames boundary with the SE1 parish of Christ Church, Blackfriars Road were abandoned as heavy rain set in.

Instead the City parishioners and liverymen took shelter with the mace and sword bearers in a riverside merchant bank. Following generous hospitality, but no break in the weather, their rights to half the river were asserted from the bank's imposing porch.

Earlier in the week, the Rector and churchwardens of St Magnus walked in procession to the Southwark borough boundary on London Bridge and ceremoniously beat the ground with long sticks.

Schoolboys were due to take to a boat on Thursday afternoon, Ascension Day, to confirm on behalf of All Hallows-by-the-Tower its boundary with Bermondsey's St Mary Magdalen parish.

Southwark Cathedral last beat its own boundary in 2004 when the Dean sailed upstream to Bankside Pier. 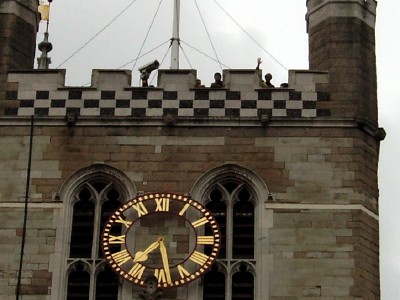 On Thursday the Cathedral maintained the tradition of a choir singing an Ascension Day anthem early in the morning from the top of the tower.