Borough High Street was chosen as the location for the launch of Ruth Kelly's new Commission on Integration and Cohesion on Thursday. 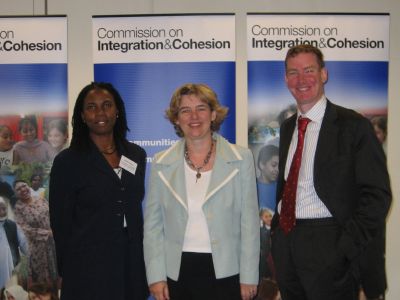 Ruth Kelly, Secretary of State for Communities and Local Government, launched the independent commission which aims to improve cohesion and remove perceived and actual barriers to integration.

The launch event was held at the Prospero House conference centre in Borough High Street.

"Southwark has one of the most diverse and also most tolerant communities in the country where people from many different backgrounds and cultures live peacefully together," says council leader Nick Stanton.

"We are looking forward to sharing with other local authorities the schemes and projects we support that have brought them together, and by learning from the experiences of other areas."

There are 13 people on the commission, one of whom is Decima Francis, director of the Peckham-based From Boyhood to Manhood Foundation, which works locally with young black men who are at risk of educational or social exclusion.

Decima Francis was the first and youngest black woman director at the National Theatre. In June 2005 she was awarded an MBE for her work for the black community in Southwark.

The commission will undertake a programme of consultation, public meetings and events across the country.