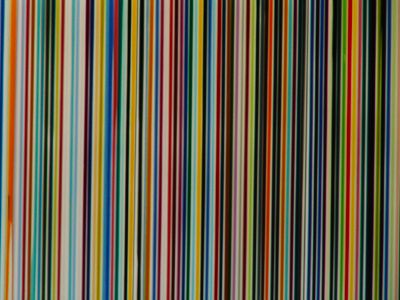 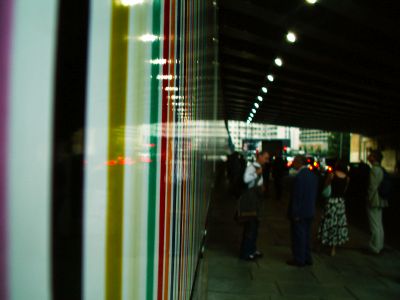 Poured Lines, which is almost 50 metres long, is one of the largest pieces of public art in London. It can be found under the railway bridge at the western end of Southwark Street.

The artwork was installed earlier in the summer and covered with an adhesive wrap. Despite the best efforts of passers-by to peel off the lower sections, the full artwork was revealed this week.

Davenport devised a new technique to create Poured Lines, pouring liquid enamel in hundreds of different panels onto steel panels, using gravity to form a series of lines down each panel.

Once the enamel was applied each panel was then fired in a furnace at 825 degrees to harden the surface to make it durable in the outdoor urban environment.

Southwark Council estimates that 1.2 million people pass under the bridge every year.

Paul Evans, Southwark's director of regeneration, described the work as "stunning and amazing" and said that the project that had produced Poured Lines "goes to the root of what we're trying to do" in Southwark.

The project has been funded by Land Securities (developers of the Bankside 123 site), Southwark Council and the Arts Council.

Mike Hussey of Land Securities spoke of his company's commitment to "engaging with people who live and work" in the areas they are undertaking major developments, particularly in Bankside which he said had been "run-down and under-invested".

Prints associated with the project can be seen at the Alan Cristea Gallery (31 Cork Street, W1) from Wednesday 13 September to Saturday 7 October.