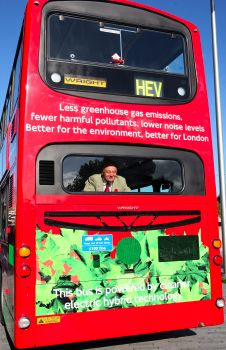 The Mayor of London Ken Livingstone this week unveiled the first hybrid double-decker bus in the world at City Hall.

Hybrid buses, which use a combination of diesel and electric power, are part of the Mayor's long-term goal of a low carbon hydrogen-based transport system.

"Hybrid vehicles can make a real contribution to a cleaner, greener public transport network for Southwark and for the rest of the capital," says Ken Livingstone.

"Bus manufacturers and operators now need to rise to this challenge to make this economically and financially feasible."

The Hybrid double-decker bus has been built by Wrights of Ballymena. It will go into service on route 141 from London Bridge to Wood Green at the end of November.

Hybrid buses are powered by a small diesel engine and electric power, thereby cutting emissions by up to 40 per cent per bus. The technology works through a battery pack providing power to the wheels via an electric motor.

The battery pack is kept at optimum power by a diesel Euro IV engine, keeping the battery charged. When the vehicle brakes, energy which would normally be wasted is also recycled and used to charge the battery. Thanks to continuous charging of the battery, the vehicle can meet the existing range of a conventional diesel bus.