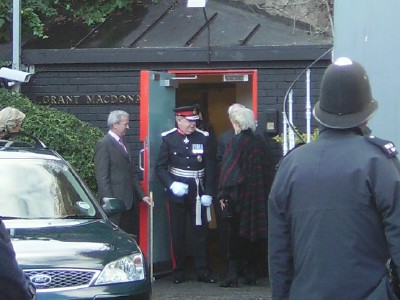 Welcoming Her Royal Highness, who was paying an official visit to the award-winning firm, was founder and managing director Grant Macdonald.

Much of Grant Macdonald's work is for overseas and includes Middle Eastern royal families and governments who require silver and gold insignia and cutlery and elaborate ornaments for formal dining tables. The workshops are also regularly commissioned by the City of London livery companies.

Grant Macdonald designed and made the Honorary Freedom casket presented by the City to President Mandela during his State Visit.

Also made in the Bear Lane studios was the 23 foot high Cross and Orb recently placed 300 feet above ground on top of the rebuilt Dresden Cathedral. Alan Smith, son of a British pilot involved in the 1945 Dresden raid during the Second World War, was one of the craftsman working on the project.

The silversmiths, which has been on its site in the historic narrow street for over thirty years, employs 26 skilled people and is one of the few remaining businesses in an area undergoing huge change. The workshop entrance is so narrow that the Royal car had to back into the forecourt.

On arrival the Princess was received by Lord Imbert, Her Majesty's Lord-Lieutenant of Greater London, who had earlier in the day presented Grant Macdonald with the Queen's Award for Enterprise in International Trade.