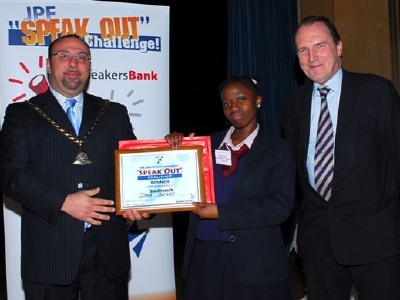 Isha was one of 17 finalists from schools across the borough. SE1 schools participating in the scheme included the City of London Academy and Geoffrey Chaucer Technology College.

Over the past couple of months trainers from SpeakersBank have been running public speaking training sessions with year 10 pupils in Southwark as part of the London-wide Speak Out Challenge funded by the Jack Petchey Foundation.

The winners of the speech competition held in each school gathered at The Academy at Peckham on Monday for the Southwark borough final in the presence of the Mayor, Cllr Paul Kyriacou.

Isha's powerful speech on the topical issue of gun crime in SE15 began with the arresting opening: "Bang! Who's dead?" and called for the community to reject guns and gangs.

The speeches were graded on delivery, structure and content by a panel of five judges led by Simon Hughes MP. He was joined by SE1-based travel journalist Simon Calder, executive member for children's services Cllr Caroline Pidgeon, Southwark's deputy director of children's services Terry Parkin and Lee Thompson from the Jack Petchey Foundation.

Topics addressed by the young speakers included education, world poverty, gang culture, peer pressure, making the most of your talents, racism and a defence of highly-paid footballers.

Isha will now go forward as Southwark's representative at the grand final to be held in early July.