Rufus Norris deserves a medal for audacity if nothing else. In one sense DBC Pierre's Vernon God Little has been crying out for adaptation. 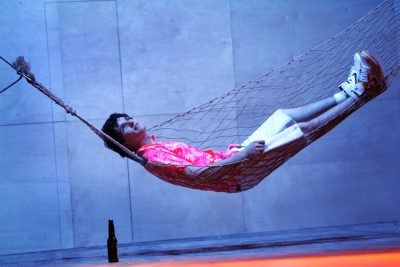 Winner of the Booker Prize in 2003, it's a satire that still feels like it has its finger on the pulse. To be completely crass there's no shortage of topical interest here – the novel's eponymous hero, Vernon Gregory Little, is the victim of a media feeding frenzy in the aftermath of a high school shooting in Martirio, Texas. Surely a more insightful qualification of its relevance is Pierre's focus on the dirty side of a society driven by media hype and consumer desire… But still it's a tricky prospect as a piece of theatre – it's only through sheer ingenuity that this production succeeds in adapting the novel's freewheeling narrative and razor sharp prose (much of which is narrated by Vernon) for the stage.

If sheer ebullience is enough to create exciting theatre Norris' creative team certainly succeeds. On offer is a veritable riot of break-neck theatricality: The ever-present poetry of the Texan tongue overflows in Duncan Wisbey's musical numbers; fist-fights run into line dancing sequences whilst Ian MacNeil's set is on castors to facilitate roller coaster scene changes. But none of this would count for much if the piece failed to evoke the darkly mirthful tone that sustains the novel. Inevitably Tanya Ronder has had to sacrifice some of the Vernon's first-person commentary – how could you translate the scathing brilliance of "Gurie retracts her tit fat across the table…the sheriff breathes a rod of decay at my face" into dialogue? But the inhabitants of Martirio are rendered in all their vivid grotesquery. We can all too easily believe this menagerie of weight watchers, paedophiles and daytime TV addict-cum journalists would sell one of their own to the lethal injection in an avaricious scramble for fame.

This is a real ensemble piece, with the 9 strong cast performing a score of characters. Colin Morgan's Vernon belies his relative inexperience. Even if you can see Norris' directorial hand moulding his youthful enthusiasm at moments, it is still an exceptional achievement to hold the dramatic centre of the piece with such aplomb. Mark Lockyer does sinister justice to Vernon's supposed father figure Lally – his drug fuelled whooping and grasping ambition are repellent, and that's before he turns psychotic! Maria Gale shines as both the good and bad women in Vernon's life – devoted Ella and vile temptress Taylor. The two big ladies – Joanna Scanian (mom) and Lorraine Bruce (Pam/Betty) – get some of the funniest lines; when Pam appears with some comfort food:

Mom "Lally's left me"
Pam "Well he took his time about it"
Mom (sobs on Pam's shoulder)
Pam "Come on get on with you the food's getting soggy."
Mom "You're just too damn perky"
Pam "Do you want me to push you down the stairs as well? HA!"

Meanwhile there's good work in the other parts from Nathan Osgood, Andrew Clark, Ray Shell and Penny Layden does a sterling job after coming into the cast at the last minute.

For some all this rollicking theatricality might tip over into decadent excess. But I can't imagine another way to do justice to a story like this one. If there is a fault here it goes back to the novel. Pierre doesn't give us a great narrative – instead we get a whole lot of attitude and a story with more plot twists than you can shake a BBQ wing at.

And there are moments when the biting, darkly humorous voice of Pierre's writing cuts through the production's untiring farcical inventiveness. It's admirable that Norris doesn't shy away from some of what is most challenging in the book. The character Lasalle pronounces a terrifying message towards the play's end, for example – "Give people what they want and they will do anything for you." There is the seed of an idea here about adolescent ideology giving way to the worst kind of adult pragmatism, as if Vernon's, admittedly bungled, crusade for truth up to this point has been nothing more than juvenile simplicity. If we can trace a theme through the novel's many twists and turns it is this and it was good to see it alive on stage.

Like the best kind of satire, Vernon God Little is thought provoking enough to make you feel slightly guilty for laughing. Rapturous applause proved that an evening bracing and entertaining in equal measure had been well appreciated.