All About My Mother at The Old Vic

Local playwright Samuel Adamson is to be congratulated on his skillful reworking of Pedro Almodovar's 1998 Spanish film into an engrossing play for an English audience. 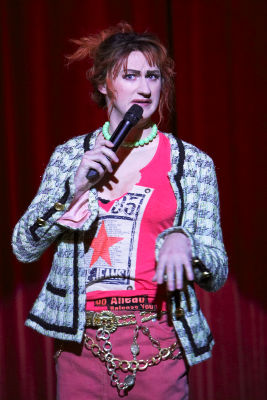 The conundrum that is modern Spain has come to The Cut. How did the repressed conservative Franco-ruled nation burst out from its church-dominated family-loving society to become the sparky energetic culture of today?

Mothers may make us who we are, but so do fathers. But fathers may not fit the conventional mould. Here the strong relationships are between a range of motherly women, transvestites, aging lesbian actresses, nuns, prostitutes and junkies who bring a new meaning to the idea of family.

Lesley Manville plays the eponymous mother Manuela with integrity and strength. The plays turns as she finds she can love again after the death of Esteban her son, this time a naive novice pregnant nun Rosa (charming Joanne Froggatt). Rosa's artist mother is Eleanor Bron, mystified by the rapid change in society. Her trade is copying the works of Picasso and Chagall, so even she deals in things not being what they seem.

Manuela takes up with the famous diva Huma Roja huskily played by Diana Rigg, and her disfunctional fellow actors. Here new relationships are opened up in both directions as they perform Tennessee Williams' A Streetcar named Desire.

Other cultural references threaded through the story are All about Eve and Lorca's Blood Wedding. Esteban (Colin Morgan) narrates his own search for his mother from the sidelines, helping with interpretation.

Director Tom Cairns has done a fantastic job bringing clarity and slickness to this complex many layered play. The sets designed by Hildegard Bechtler cleverly morph from one scene to another in a cinematic way and display a fine set of contemporary wallpapers.

This production is a welcome return to form for The Old Vic and deserves full houses every night.

Have you seen the show? Tell SE1 what you thought.