Robert Burton, a familiar figure in Borough Market, has died after a short illness. He was 62 years of age. 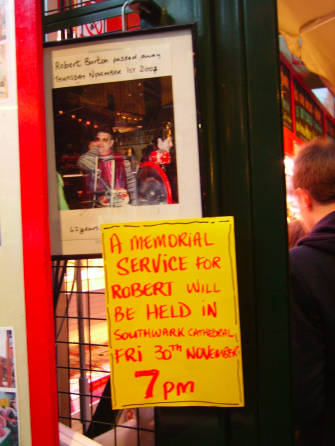 He was still to be seen as usual at the Sillfield Farm stall in September but died on 1 November. His body was cremated in Lancaster earlier this month.

He was a co-director of Peter Gott's Cumberland farm and both started working in Borough Market in 1998 when the retail food market was launched. Every Thursday night Peter and Robert, assisted by some of the other twelve local poeple working on the farm, loaded up a large trailer with meat, cheese and eggs for the drive down to London.

"Our pigs are free-range, enjoying life in the fresh air and the beautiful Cumbrian scenery" Robert once said. "They're killed on a Monday, we get them back on a Tuesday. Then we cut the meat up for our first day at Borough on Thursday.

"The sausages won't burst with a bang" he used to say. "We've added no bread fillers here."

He was taught plucking and dressing of poultry by his mother before working at the Kendal auction market and later at West Cumberland Farmer Agricultural Supplies. In 1985, after Peter Gott had bought the then redundant Sillfield Farm, Robert went to work as the farm's van driver.

Soon he became Kendal shop manager and later farm manager for sales. Peter Gott described him as an ambassador for Sillfield Farm who never had a day off work.

"He was a very loyal warm-hearted, colourful market character a true gentleman."