The National Theatre Studio in The Cut re-opened in November following a 15-month, £6 million redevelopment of its 1950s building. 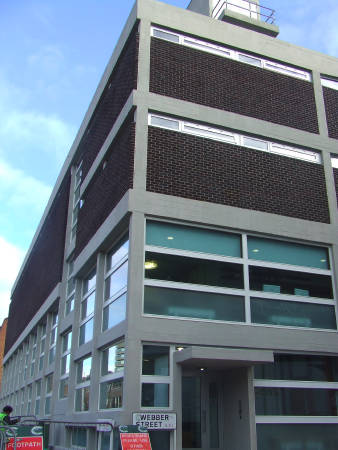 The project, by architects Haworth Tompkins (also responsible for the rebuilding of the nearby Young Vic), has effectively doubled the studio's development capabilities.

The "New Brutalist" building dates from 1958 and was originally the annexe of the adjacent Old Vic theatre. The National Theatre bought the building in 1998 for ú1.1 million. It was listed in 2006.

The refurbished Studio also provides a permanent home for the NT Archive and the education department's training and project work.

It is also a resource for a wide range of artists working throughout British theatre, providing an environment in which writers, actors and practitioners of all kinds can explore, experiment and devise new work free from the pressure of public performance.

The new NT Studio is dedicated to the memory of Max Rayne, chairman of the National Theatre from 1971 to 1988.