19 people were fined £50 each during a police operation to clamp down on smokers in the forecourt of London Bridge Station. 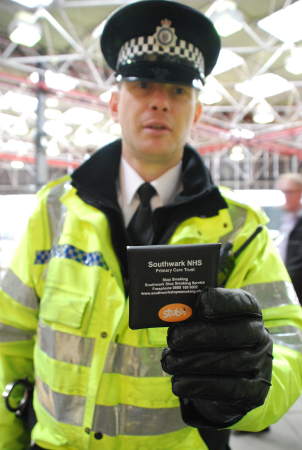 BTP PCSO co-ordinator Saul Marshall said the operation was the result of complaints from members of the public about the large number of passengers flouting the smoking ban at the station.

"The operation came after an exhausting re-education programme informing the public about not smoking on the forecourt and bus station area," says PC Marshall.

"Despite putting up extra posters warning that the canopy area on the forecourt was considered an enclosed space and on the spot fines would be imposed, smokers continued to ignore the warnings.

"We received an increase of complaints from the travelling public about having to walk through a cloud of cigarette smoke every time they exited the station, so we responded by conducting the operation."

PC Marshall said 19 smokers were each issued with a Ł50 fine during the evening peak on Wednesday 2 April. Some of those fined were standing next to the posters when they lit up.

Council enforcement and education officers were on hand with smoking advice and special recyclable pouches for smokers to extinguish their cigarettes and discard of the butts for disposal later.

PC Marshall added: "Seven fined people needed further words of guidance from police about the fining process and their behaviour about being fined.

"People are getting the message and are smoking away from the main entrance and bus station canopy.

"We had several members of the public express their gratitude to officers for conducting the operation. We will certainly look at conducting further operations in the future if smokers continue to disregard the ban."

Have you been fined for smoking at London Bridge?