A portrait of Mary Wollstonecraft painted during the time she was living in Southwark is on show at the National Portrait Gallery. 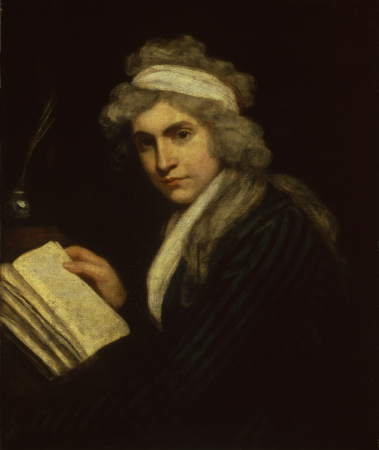 The exhibition Brilliant Women: 18th-century Bluestockings includes the painting by John Opie. He produced the picture during 1790 and 1791 whilst Mary Wollstonecraft was living in George Street, now known as Dolben Street, off Blackfriars Road.

It is not known whether Wollstonecraft sat for the painting at George Street or at Opie's home in Great Queen Street near Covent Garden. Opie was certainly an a close friend and frequent visitor so some work may have been done in Southwark.

Opie depicts her in a studious pose reading a book which was unusual for a woman who was not wealthy. At the time the first feminist was about to publish her book The Vindication of the Rights of Women.

She lived on the north side of George Street near the junction with Chancel Street where there is a blue plaque. Numbers 42-44 have a similar frontage to the house rented by Mary Wollstonecraft who wanted to be within of walking distance of St Paul's Cathedral churchyard where publishers had offices.

The exhibition to explores the culture, impact and identity of the Bluestockings who forged new links between gender, learning and virtue in 18th-century Britain

One of only two men featured in the exhibition is fellow Southwark resident Samuel Johnson who qualifies as "a friend of many bluestockings".