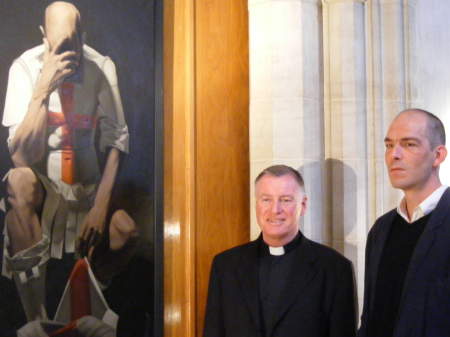 Before revealing the picture, Canon James Cronin said: "...we see the strength of character and we also glimpse the human fragility not always associated with the victorious St George."

Scott Norwood Witts, who has produced altarpieces for Dover Castle and the Royal Garrison Church at Aldershot, says that he was stimulated by the current deployment of British forces overseas and the historic misrepresentation of St George.

"I wanted to change the identity of St George. He was a Roman soldier who put his neck on the line in opposing the persecution of Christians," said the artist at the unveiling.

The painting, which shows a weary soldier holding the flag, will remain at St George's Cathedral for the next two weeks.

Southwark's Roman Catholic Cathedral was one of the partner organisations in the new local St George in Southwark Festival which aims to promote St George as a multicultural patron saint for the Borough.