The Keats, Lung and TB Story teaches children about local history and medicine

Pupils from Cathedral School performed "The Keats, Lung and TB Story" at Guy's Chapel on Wednesday. 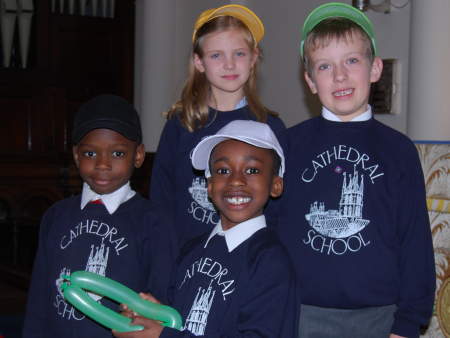 The play was staged as the culmination of an interactive programme designed to teach children more about science and their bodies.

The Ł2,000 grant from Guy's & St Thomas' Charity funded this and a future project, and the play's success will be assessed in comparison with the Wonderful Kidney Story of 2006, also performed by Cathedral School pupils and funded by the charity.

The 29 six and seven year olds wore different coloured baseball caps to represent cells and germs in the lungs: red and white for blood cells; black for tuberculosis (TB) germs; blue for antibiotics; green for air gases and yellow for the diaphragm and alveolus – where oxygen is passed into the blood stream. They demonstrated a breathing lung, with the Chapel's aisles and pews as a stage set.

The children posing as a giant diaphragm waved in and out of the aisle as the oxygen flowed into the system, while white blood cells detected and attacked black-hatted germs. Antibiotic crusaders in blue hats rushed in when the white cells were overwhelmed, destroying the germs.

Japheth, who played a white blood cell, said: "I learned such a lot. Before the lessons I didn't know anything about the lungs. I most enjoyed battling the germs so they couldn't get into the blood."

Daisy agreed: "It was really good fun. I played part of the diaphragm and we rushed in and out so that air could get in. Before I didn't really know that they didn't have antibiotics in the past."

The children were told John Keats' story, drawing on local history for a real life example of someone suffering from extreme TB. Born in 1795, the Romantic poet, best known for his odes, trained as a surgeon-apothecary at Guy's Hospital and lived in nearby St Thomas' Street. Rather than become a surgeon he turned to poetry, but contracted TB and died when just 26 years old. The cast learned that a vaccine to prevent TB, or antibiotics to treat the disease – those in blue hats – were not developed until the mid twentieth century, long after Keats had died.

Organised by Biolink, a company which uses history to engage the public in clinical science, the performance and history lessons were conducted over four sessions taught by Tom Deveson prior to the actual performance.

"Projects like these are an education for everyone," says David Leaback, director of Biolink.

"The children learn while having fun and teach the adults in the audience as they watch. Acting and getting involved can be so much more effective than a plain textbook."

Dr Heather Milburn, consultant in respiratory medicine at Guy's and St Thomas' Trust said: "As well as giving the children a flavour of how TB affects the lungs, this approach was very helpful in teaching students how to communicate quite complex information in a simple fashion."