Poet laureate Andrew Motion visited Guy's Hospital this week to unveil the world's first statue of poet John Keats who trained as a surgeon at the hospital. 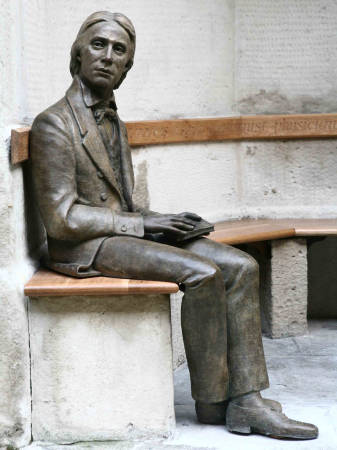 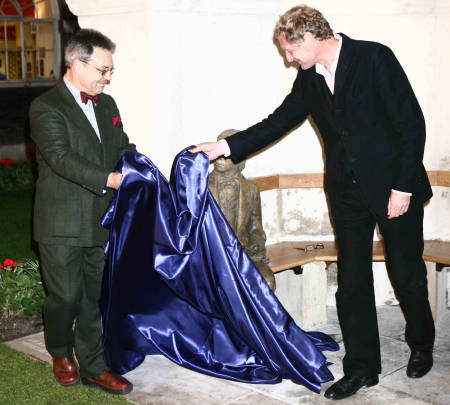 The bronze statue by sculptor Stuart Williamson is located in an alcove from the old London Bridge which sits in the grounds of Guy's Hospital. Patients, staff and visitors can sit alongside the seated figure of the Romantic poet.

Guy's and St Thomas' Charity and the Friends of Guy's Hospital joined forces to commission the statue. The donation from the Friends included gifts from the The D'Oyly Carte Charitable Trust, the Keats-Shelley Memorial Fund and many contributions made in memory of Dr Robert Knight.

Dr Knight qualified in medicine at Guy's Hospital Medical School, training and working at Guy's throughout his career. He was a consultant physician with a special interest in chest diseases and the medical problems of women with breast cancer.

A lifelong Keats enthusiast who lectured on the subject and coordinated the Keats' Society at Guy's, Dr Knight first suggested a statue of Keats in the hospital grounds to commemorate his formative medical experiences.

Born in 1795, the Romantic poet trained as a surgeon-apothecary at Guy's Hospital in 1815 and 1816 and lived on nearby St Thomas' Street where his home is marked with a blue plaque. He chose not to practice after qualifying, put off by the gruesome aspects of 19th-century surgery, turning instead to poetry as a full time occupation.

Andrew Motion – who has written a biography of Keats – unveiled the statue in the week of the poet's birthday.

"Keats never gave up his allegiance to Apollo, patron god of both poetry and healing," Prof Motion told guests.

"I'm surprised that he hasn't been commemorated in such a way before. In my own experience it is a pleasure to get involved in art while unwell. It not only takes your mind off things, but is cathartic, giving you the chance to redress a personal Balance destabilised by the experience of being ill and out of control, and to reassert yourself. I have long been a supporter of art and healthcare schemes and wish more was done to integrate the two."

Sculptor Stuart Williamson referred to Keats' life mask, paintings and drawings for inspiration. He agrees with Motion's take on Keats' character: "I wanted the statue to represent Keats as realistically as possible, debunking the myth that portrays him as a passive creature of the senses and reflecting his often radical and robust nature. The sculpture is meant to show Keats in a contemplative mood, as if perhaps in a moment of reflection or composition."

Karen Sarkissian, director of art and heritage at Guy's and St Thomas' Charity, added: "We are delighted to have been able to work with such a renowned sculptor and to provide the local area with a new artistic icon. We hope the work inspires those who sit with Keats to rest, contemplate and feel more positively about their time in hospital – whether they are a patient, visitor, member of staff or student."