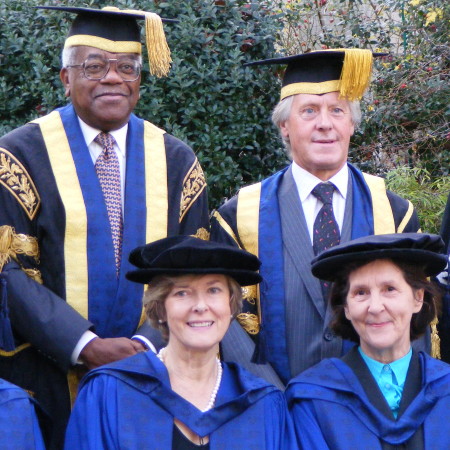 "Dr Moberly has made a formidable contribution to health management and medical ethics, but also to education, and throughout her career, to the cause of anti-racism," said the citation read by the vice-chancellor Deian Hopkin.

In recalling her teaching in Zambia, Prof Hopkin told the audience that one of her pupils was now Zambian high commissioner in London. Her association with exiled ANC leaders resulted in her being invited many years later to the installation of South African president.

Back in London she became a member of the Anti-Apartheid Movement's national executive. Prof Hopkin revealed that during a demonstration Dr Moberly had been arrested in Downing Street and placed in a Bow Street cell. After being acquitted of threatening behaviour she was made a magistrate.

Her jobs in the teaching profession included head of sixth form at Pimlico School.

Dr Moberly was, before her growing involvement in many aspects of the NHS, a member of Lambeth Council where she chaired the Housing Committee and worked alongside Tony Banks and Ken Livingstone.

She has been a member of the governing body for Guy's Hospital and St Thomas' Hospital since 1997. Last month her term of office as chairman of the Guy's & St Thomas' NHS Foundation Trust was extended to run until October 2010.

Honorary Fellowships were awarded to David Waboso, London Underground's engineering director, and the pioneering husband and wife architect design team Henry and Lillian Stephenson who both lectured at the University when it was the Borough Polytechnic.