A new Hampton by Hilton hotel on the site of Partnership House in Waterloo moved a step closer this week when Lambeth Council's planning applications committee resolved to grant permission. 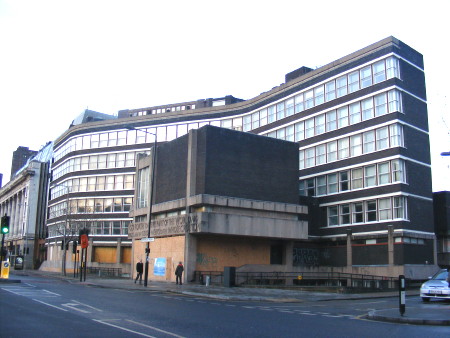 Partnership House will soon be demolished 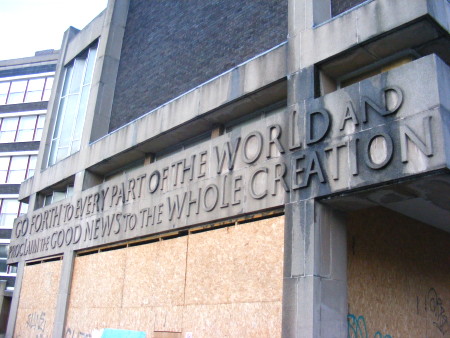 The distinctive lettering above the entrance to Partnership House

The 9-storey hotel designed by KSS for developers CPSL will replace Partnership House which until 2003 was the home of the Anglican Communion and a number of other church-related organisations including SPCK and USPG.

The development is a scaled-down and redesigned version of the original proposal which included a 13-storey tower on the corner of Gray Street which was viewed unfavourably by Lambeth planners and Government design watchdog CABE.

Hampton is described by Hilton as "a new kind of economy hotel with an upper mid-scale finish". The brand is well-established in the US but has only just been introduced to the UK hotel market.

The committee heard from Michael Ball, director of the Waterloo Community Development Group, who explained that the latest design is "a much better scheme" that is "largely acceptable" to his organisation.

He highlighted that there are currently 17 hotels existing or proposed in the Waterloo area compared to just two a decade ago and that the abundance of visitor accommodation is becoming "a real issue" for the local community.

The Hampton by Hilton site is just yards from a proposed Travelodge at St George's House further down Waterloo Road whilst at the junction with Westminster Bridge Road work is currently under way on a new hotel to be run by Spanish chain H10. There is also an easyHotel proposed for Baylis Road.

After spending some time ironing out details of the section 106 agreement, which will include a rare cross-border payment to Southwark Council for improvement works at Quentin House which stands opposite the proposed hotel on Gray Street, councillors unanimously endorsed the scheme.

The developers have agreed that the hotel operator will pay £10,000 a year towards the upkeep of the Waterloo Millennium Green opposite the proposed hotel.

It remains to be seen how quickly work will start on the development as the bank which financed CPSL's purchase of the site was this week nationalised by the Irish government and the developers will now have to shop around to finance the building work.