Four men have been sentenced at the Old Bailey to 11 years in prison for the manslaughter of Tomasz Bundyra in January at a Waterloo squat where they were all staying. 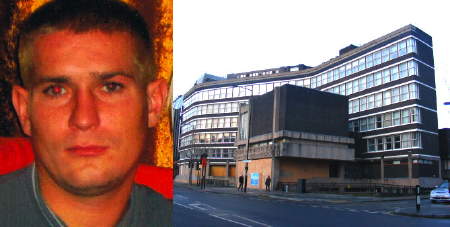 Sentencing was adjourned on Kristof Skobel (48) until 11 December.

In addition the court ordered that all five men will be deported to Poland at the conclusion of their sentences.

A sixth man, Janusz Lont (27) was discharged from the case with no further action on 10 November when the other five pleaded guilty to manslaughter.

All the men, including the victim, are Polish nationals of no fixed address.

The convictions follow an investigation by the Homicide and Serious Crime Command based at Sutton.

At lunchtime on 26 January police were alerted to a man's body in the disused Partnership House office block on Waterloo Road at the junction with Gray Street.

They found a man with serious head injuries. Tomasz Bundyra was pronounced dead at the scene. The post mortem examination showed cause of death to be multiple blows to the head, torso and legs.

Bundrya had been living rough in the area, probably in the disused office block in which he was found.

In January Lambeth councillors gave the go-ahead for the site to be redeveloped as a Hampton by Hilton hotel but the plans have stalled because of the recession.

Neighbours have complained about antisocial behaviour by squatters in the office block. Breezeblocks have recently been installed in an attempt to make the building secure whilst its future is determined.