A demonstration against the play England People Very Nice was held outside the National Theatre on Friday. At one point a large banner was displayed from a balcony. 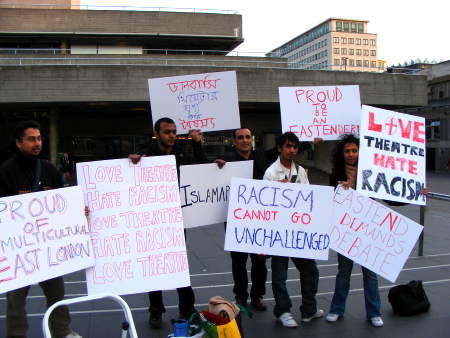 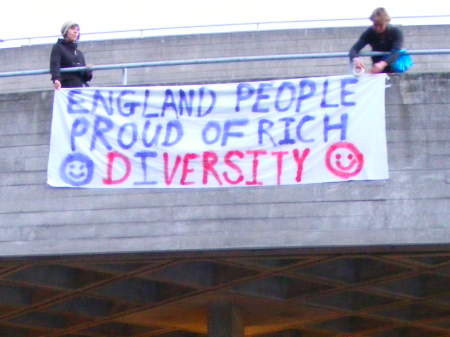 The controversial play by Richard Bean looks at immigration in London's East End. It is directed by the National's artistic director Nicholas Hytner who says that the play "lampoons all forms of stereotyping: it is a boisterous satire of stereotypes of French, Irish, Jews, Bangladeshis, white East End cockneys, Hampstead liberals and many others.

"Every stereotype is placed in the context of its opposite and it clearly sets out to demonstrate that all forms of racism are equally ridiculous."

The outdoor demonstration preceded a Platform event during which the play's writer Richard Bean was due to discuss his work.

Cllr Abjol Miah, leader of the Respect group on Tower Hamlets Council, was present with several objectors from the East End.

"I am passionate about theatre and I don't think theatre should be used to peddle racist filth under the guise of comedy and serious theatre." Hussain Ismail told the small crowd of passers-by on the riverside who stopped to listen to speeches.

"We don't need to be told about multi-culturalism by an elitist institution that does not represent multi-cultural London. What we need to do is to challenge the racist rubbish."

"It's racist propaganda. It's a rubbish play," he declared.

"You would not believe that they could put on a play like this at the National Theatre. It's shocking.

"This is a national public theatre funded by us including ethnic minorities of London which represent 40 to 50 per cent of London. How dare they, someone like David Bean and Nicholas Hytner, put this play on. They are not exactly representative of multi-cultural Britain."

He denounced the NT as a bastion of white middle class male power.

Irish writer Paul O'Brien, who had come to London from Dublin, told the crowd: "William Butler Yeats in 1904 founded the Irish Literary Theatre which became the world famous Abbey Theatre.

"He said theatre should become a forum for debate and when there was a riot in 1907, at the first performance of the Playboy of the Western World, Yeats welcomed that riot.

"What he said was 'we are reaching out to the people who don't normally come to the theatre'."

Turning to the new play, Mr O'Brien said: "We have problem about this play. It's writing about a class of people who live in the ajacent area to the National Theatre but don't normally come to the theatre.

"A middle class audience is being entertained by steriotypes of working class, Irish, Bangladeshi and Jewish people that is not representative of people who live in this area.

"This play needs to be brought out from the confines of the National to the surrounding area to open out a debate about the sort of world we live in.

"The play can only benefit from opening its doors outward into the community and debating the issues its trying to raise on the stage."

The National Theatre is staging two debates about the play in April.