Sheila Smith, who has played a leading role in community life on the Wellington Mills Estate in North Lambeth since 1976, has been honoured with a Lambeth civic award. 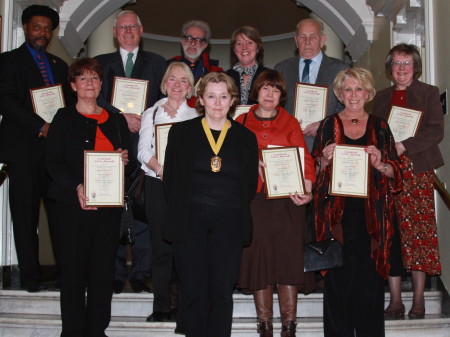 Sheila Smith moved into the newly-built Wellington Mills Estate next to Morley College in July 1976 with her husband, two sons and young daughter.

From the start – together with her husband – she was involved in a range of social activities for children and adults as the new community was formed.

The citation for her award praises her "30 years unobtrusive service" during which she was
she was closely involved in the formation of the cooperative and in organising and participating in the voluntary work overtaken by residents in the years before staff were employed.

"Most importantly, Sheila is universally respected and admired for her courtesy, calm and common sense. She is both a role model and a friend to many residents."

In 2006 residents of the estate celebrated its 30th anniversary with a special exhibition at Morley College.

Among the other award recipients was Brian Bloice who teaches local history courses at Morley College and chairs the Southwark & Lambeth Archaeological Society which holds its monthly public lectures in Waterloo.