Bermondsey bookseller and author Peter Marcan has died unexpectedly at the age of 58. 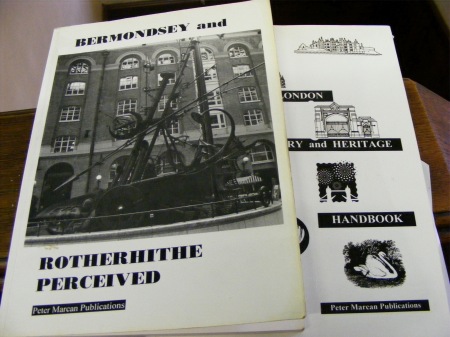 Peter Marcan came to SE1 from north London in 1991 having longed for a different environment.

"Bermondsey is perhaps surprisingly a place of towers and turrets, of spires and extraordinary chimneys" he wrote seven years later.

"Perhaps only from Bermondsey can you glimpse Tower Bridge looking so enticing, so magical. In Bermondsey Square the clinical precision of the tower block at Guy's Hospital on the horizon glares out at the tender gracefulness of St Mary's Church. In Tower Bridge Road the monumental chimney of Hartley's the old jam factory confronts the slender spire of Haddon Hall Baptist Church."

Peter Marcan lived in a flat at Bermondsey Central Hall where he ran his second hand book business specialising in arts, history and classical music.

He felt that the "great world" was on the doorstep of Bermondsey and when he walked around the area he was always aware of the locations of now departed businesses such as Christy's the hatters, Crosse & Blackwell pickles and Jacob's biscuits.

His book Bermondsey and Rotherhithe Perceived was lavishly illustrated with old prints and drawings. It also had plenty of interesting facts such the name of the 1989 Vogan's Mill building having been traced back to 1813.

This book followed Visions of Southwark: A Collection of Nineteenth and Twentieth Century Pictures co-written with Lesley McDonald.

But he also looked beyond SE1 and in 1996 published A London Docklands Album: A Collection of Nineteenth and Twentieth Century Picture Material from Diverse Sources followed two years later by The Millennium Guide to Historical, Heritage and Environmental Networks and Publications.

Neighbours at his residential block included Guy's medical students whose stresses and joy he shared. At at outdoor dedication service for new flats in 1993 'new resident' Peter Marcan played the hymn tunes on his violin and added his own musical arrangements. One of his first books was Music for Solo Violin Unaccompanied.

He was very aware of all day noise in the city centre but once in his flat where he died he wrote the following: "As darkness descends a strange sadness gives way to silence, and stillness, and finally to sleep; sleep which so often was denied me when I was living across the river in the lands of the little monsters."

• Peter Marcan's funeral is on Wednesday 5 August at 1.45pm at Honor Oak Crematorium.