The long closed Duke of Clarence pub at St George's Circus is being occupied by a squatter. 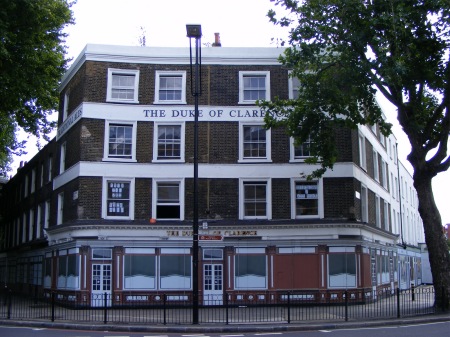 The Duke of Clarence at St George's Circus

Passers-by have become aware of some sash windows being opened or having fresh notices.

A man called 'David', claiming to have worked with homeless people, can sometimes be seen at the windows. He told the London-SE1 website that he had been legally in residence for several weeks.

He describes his occupation of the former pub as a protest at the building, now owned by London South Bank University, being left empty for so long. He promises to stay "as long as it takes the university to come with an answer".

A spokesperson for the London Road Traders Association said members were "fully supporting" the protest as the building had been derelict for 15 years.

Member Fin McAlindon said that he had proposed restoring London Road's Georgian buildings for part community use. "Three years ago the Traders had also made a proposal to bring the buildings back into use on medium term leases," said Mr McAlindon. "But talks with the former Vice-Chancellor failed."

The Duke of Clarence was built about 1820 and is a listed building on the English Heritage Buildings at Risk Register. In the 1970s, shortly before its closure, the pub was known for its popular go-go dancers entertainment.

"London South Bank University (LSBU) can confirm that there is one squatter currently occupying an LSBU building (address 123-132 London Road and 113-119 Borough Road)" said LSBU Director of Estates and Facilities Stephen Wells in a statement.

We were made aware of the occupation on Thursday 23 July 2009 and are in the process of taking legal action to obtain vacant possession.
Ā
"These buildings are Grade II listed and lie within the St George's Circus Conservation Area.ĀWe have completed work to stabilise the historic Georgian terraces; the occupant has been made aware that theĀterraces currently lack key internal structures and are not fit for habitation without significant further investment.
Ā
ŌĆ£We will be consulting about their long term use. At this stage we are seeking to widen the debate before we choose any particular option. We welcome discussionĀfrom all interested parties.ŌĆØ