Guerrilla gardener Richard Reynolds has been appointed a London Leader. 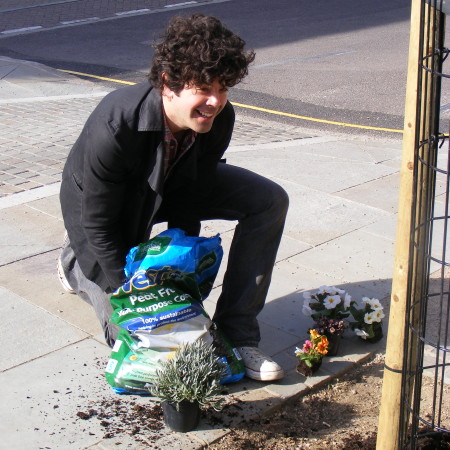 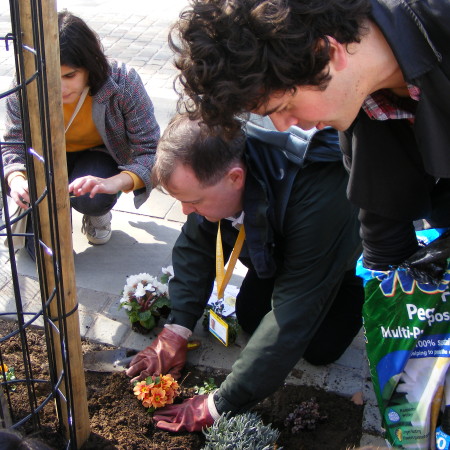 The author and Elephant & Castle resident is one of fifteen new London Leaders appointed by the London Sustainable Development Commission.

Each Leader is committing to a community project which will help the capital fulfil the goal of becoming a world-class sustainable city.

Richard Reynolds marked his first day in office by launching his Pimp Your Pavement campaign with an inaugural planting outside The Roebuck at the junction of Trinity Street and Great Dover Street.

He was joined by Chaucer ward councillor Tim McNally and residents including Clare Armstrong of Southwark Living Streets. The pub has agreed to water the plants which are at the base of several new lime trees already planted by Southwark Council as part of a recently completed landscaping project.

Among the new plants are perennial wallflowers, swift, daisies and 'Easter Bonnet' primulas. Richard Reynolds said that he was adding pansies "which look delicate but are actually very tough and long-suffering". He said that the choice of sedum and lavender was part of a plan to attract bees.

"Pimp Your Pavement is a campaign inspired by guerrilla gardening," said Richard Reynolds. "It's about encouraging more people to take responsibility for a very local patch of their community by focusing on the opportunities of a space that's very immediate, very manageable, very sociable and yet sadly overlooked."

Later this week the new London Leader will be in Berlin and Cologne giving advice to councils on "micro community gardening" to make German cities greener.

Mayor of London Boris Johnson said: "I look forward to seeing the 2010 London Leaders make their mark on the capital, kicking off with Richard Reynolds' work with local authorities to transform the barren patches of land into flowerbeds."