The ticket office at the Shell Centre entrance to Waterloo Underground Station could be shut down and opening hours slashed at booking offices across SE1 if leaked proposals by Transport for London are implemented. 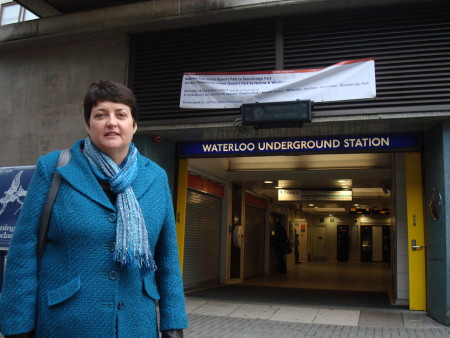 Val Shawcross AM outside the Shell Centre entrance to Waterloo Station. The entrance closes at 10pm each day and may not have a staffed ticket office if the latest proposals are implemented.

The internal TfL consultation document detailing proposals to cut opening hours at ticket offices across the capital has been published by the Transport Salaried Staffs' Association.

"All politicians are economical with the truth but Boris really takes the biscuit with his plans to cut hours at nearly 280 ticket offices," says TSSA leader Gerry Doherty.

He added: "If he doesn't want to be known as the Hypocrite of the Year he should drop these plans and honour his election manifesto to maintain a safe and reliable tube system with fully staffed booking offices."

Transport for London insists that every station that currently has a ticket office will retain one – but this leaves open the possibility of shutting secondary offices in large stations like Waterloo and cutting hours elsewhere.

The introduction of Oyster means that fewer tickets are now sold across the counter, but some transactions still require a visit to a staffed ticket office.

The York Road entrance to Waterloo Underground Station currently has a staffed ticket office on Mondays to Saturdays, but the leaked proposals indicate that no ticket windows will remain if the changes are implemented.

Boris Johnson also recently rejected calls from South Bank venues including the National Theatre for the York Road entrance to remain open after 10pm for the benefit of theatregoers.

"In February 2006 following a review of customer usage and ticket sales the decision was taken to close the Shell/York Road exit after the evening peak at 10pm," the Mayor said in January in response to a question tabled by Val Shawcross, the Lambeth & Southwark member of the London Assembly.

"Less than 7 per cent of the people who used Waterloo Underground station after 10pm prior to this change used the Shell entrance.

"Subsequent reviews have not supported the re-opening. Consultation with staff and trade unions took place ahead of the closure and local businesses were notified."

What the proposed changes mean to SE1 stations

"The Mayor is proposing to cut up to 450 jobs from ticket offices – his claims that this will not impact on passengers' experience just don't add up," says Val Shawcross.

She added: "I cannot see how these plans can fail to inconvenience passengers. Opening hours at hundreds of station ticket offices are being reduced, in some cases dramatically. People value the presence of staff in ticket offices; it is reassuring to know where to find a member of staff in the event of an emergency or if you need information.

"I believe people will feel less comfortable about using tube stations, particularly later at night, after these changes. And what concerns me most is the lack of clear information and all the contradictory statements coming from the Mayor's office, this is a serious issue and Londoners need to know the facts."