Plans for a 191-room "affordable luxury" hotel in Lavington Street have been given the go-ahead by Southwark's planning committee. 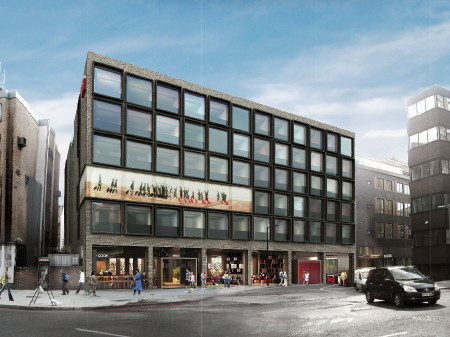 The company has two hotels in Amsterdam, one of which was voted the world's trendiest by TripAdviser users, and is about to open a hotel in Glasgow.

CitizenM's planning application to demolish Surrey House and replace it with a modular hotel building was considered by Southwark's planning committee last week.

A 6-storey building featuring an external panel for changing displays of artwork has been designed by Sheppard Robson. The hotel is expected to create 60 jobs.

Planning officer Yvonne Lewis said that she was mindful that the loss of employment floorspace in the existing building could set a precedent.

"I'm extremely unhappy about this one," said former council leader Nick Stanton, now a member of the planning committee.

In response to questioning from Cllr Stanton, Yvonne Lewis confirmed that although she was recommending that permission be granted for the hotel, a refusal would also be "sound and rational".

CitizenM's Menno Hilberts told the committee that the hotel's pre-assembled rooms are "almost like a luxury yacht crammed into a small area".

Cllr Robin Crookshank Hilton said that the hotel's design is "incongruous" and warned of a saturation of hotels in the Bankside area.

The committee approved the planning application by 4 votes to 3. The hotel was supported by the Labour members of the committee whilst the Liberal Democrats voted against.

A planning application for a 122-room Premier Inn hotel at the other end of Lavington Street is still awaiting determination by Southwark Council.

Both sites are very close to the Mercure London City Bankside hotel and the Holiday Inn Express London Southwark.