Work is to start on the construction of a 5-star Hilton hotel on a site bounded by Great Suffolk Street, Price's Street and Bear Lane. 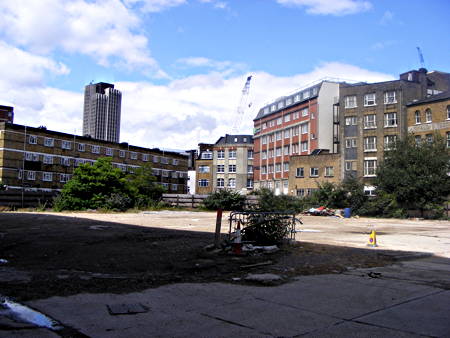 Since then the developer's plans have changed and the hotel will now be run under the Hilton brand.

The 8-storey building is designed by Dexter Moren, the same firm responsible for the nearby Travelodge London Southwark in Union Street.

Since permission was granted the site has remained vacant although it has frequently been used as a base for film units.

Recently signs appeared on the walls around the site announcing that work is to start on the construction of the Hllton Bankside hotel.

According to the architects' website, the Hilton will have 280 rooms and will be Tate Modern's closest 5-star hotel.

Last month Southwark Council gave the go-ahead for a 128-room Premier Inn just a few yards away at the corner of Great Suffolk Street and Lavington Street. An 'affordable luxury' citizenM hotel is also planned for the other end of Lavington Street.

Work is also due to start this summer on two new hotels in Blackfriars Road with a total of 477 rooms.