Will Elephant & Castle get a new swimming pool?

Alongside the main deal with Lend Lease for the Elephant & Castle regeneration, Southwark Council's cabinet has also chosen the current leisure centre site at Elephant & Castle as the preferred location for new sports facilities. 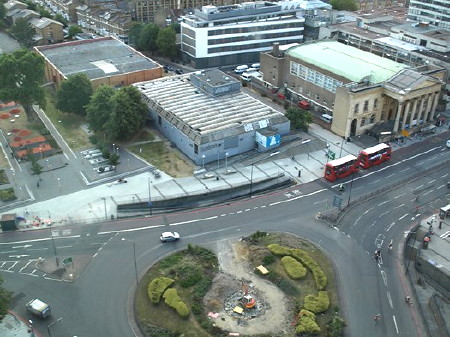 The front half of the site could be redeveloped for housing with new leisure facilities built to the rear. Photo courtesy @Cyclingblanche

The new leisure centre falls outside the terms of the agreement between the council and Lend Lease but will be partly funded by some of the proceeds from the sale of the council's Heygate Estate land.

A public consultation on the proposed leisure centre will be held this summer before firm proposals are considered by cabinet in November.

The current Elephant & Castle Leisure Centre often has to close to the public after heavy rainfall due to the poor state of the building's roof and the existing swimming pool has been out of use for many years. Earlier this year a council report said that the building is "in severe need of investment".

The council considered four sites for a new leisure centre: two plots on the current Heygate site and another at Stead Street in SE17.

The council's preferred option is to redevelop the existing site alongside the Metropolitan Tabernacle. The eastern side of the site is likely to be redeveloped for housing with the new leisure facilities being built on the western half of the site away from the main road.

The proceeds from the housing development would help to fund the new leisure centre.

The new centre could include a six-lane 25 metre swimming pool, a teaching pool, a health suite and a four-court sports hall.

Some of the options considered by the council lacked a swimming pool, but the administration is adament that it remains committed to a pool.

"We do want to see a swimming pool at the site and we're determined to deliver," said Cllr Peter John.

"This site is really key," said Cllr Veronica Ward, cabinet member for culture, leisure, sport and the Olympics. "It's very good that we've been able to put a [leisure] facility at the heart of the Elephant & Castle."

Liberal Democrats have accused the Labour cabinet of a U-turn after the cross-party overview and scrutiny committee recommended the inclusion of a specific mention of a swimming pool in the resolution made by cabinet.

"Like most local people we were stunned that Labour were prepared to sign a deal that did not involve a new swimming pool," says Cathedrals ward councillor Geoffrey Thornton.

"So this partial victory is good news."

• The report to cabinet says that the council should consider the implications of the proposed Doon Street pool on the South Bank on the viability of a similar facility at Elephant & Castle.