Mayor of London Boris Johnson was joined by actress Joanna Lumley outside City Hall on Monday morning to launch the London Reuse Network, a new initiative to encourage Londoners not to throw away furniture and household goods. 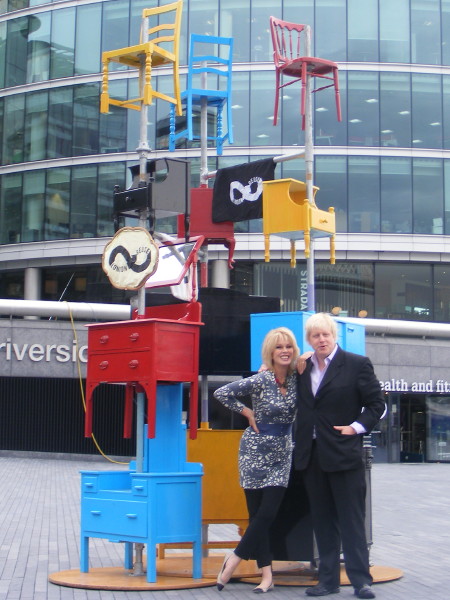 Johnson and Lumley posed in front of a 3-metre high sculpture made from recycled furniture including chairs and chests of drawers.

"I just want to say that there's no shame in reusing things – my whole family has spend their lives in secondhand shops, repairing stuff and making stuff," said Joanna Lumley.

"It's the most sensible and rewarding thing you can do."

The Mayor has announced £8 million funding from the London Waste and Recycling Board (LWARB) to create the world's largest 'reuse network', helping household items find a new home rather than being chucked away.

"We throw away 65,000 tonnes of perfectly useable furniture and white goods," says James Cleverly AM, chair of LWARB.

"Typically they go to landfill. They can be made good again. Often small repairs can turn your unwanted item into someone else's treasured possession. And that's what we're doing.

"We're not only preventing landfill, we're providing opportunity for young people to use skills in repair – an art that we seem to have lost recently – and we're putting these things back into useful public use."

The funding will go to the London Community Resource Network (LCRN), a social enterprise which will set up the network made up of 'clusters' of organisations , including local authorities and charities who will work together to deliver an easy-to-access and consistent reuse service to residents and businesses within their area.

It will collect, store, refurbish and sell on everything from furniture, books, carpets and bikes through to cookers and fridges. It aims to divert 17,000 tonnes of reusable products from landfill over the first two years of the project saving over 80,000 tonnes of carbon emissions. It will provide a single 'reuse hotline' and web portal serving the whole of London.

By 2015 the network aims to be diverting over a million items from the waste stream every year, training thousands and employing hundreds of people.

The first cluster will be set up by Western Riverside Waste Authority who manage waste from the London Boroughs of Hammersmith and Fulham, Lambeth, Wandsworth, and the Royal Borough of Kensington and Chelsea.

Other delivery partners include Southwark-based Offers/Ex-IT which collects and distributes furniture and office equipment to voluntary groups and start-up businesses.`