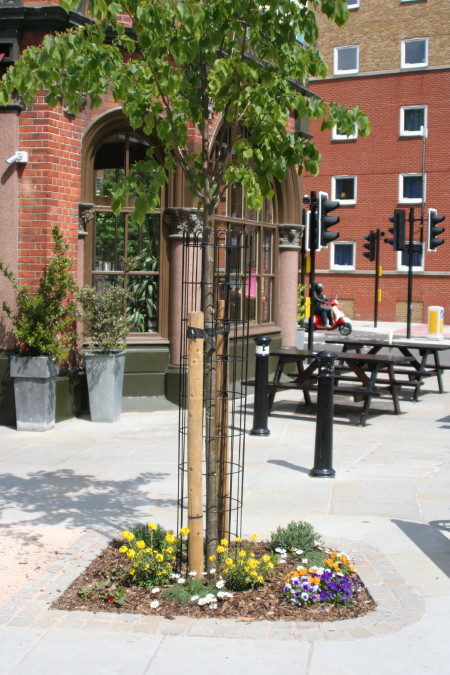 Thanks to Clare's work, yellow wallflowers, sea thrift, sedum, lavender, rosemary and primula now thrive in the tree pits at the junction of Trinity Street and Great Dover Street outside The Roebuck pub.

The Conservation Foundation's Green Corners Awards celebrate the Londoners whose handiwork brighten our lives and improve the capital's biodiversity. There are monthly winners who will go forward to the grand finals next spring for judging by a panel of celebrities and gardening experts.

"Trinity Street piazza was part of a street used as a rat-run, with nose-to-tail traffic travelling through it every morning and every evening belching out exhaust fumes," says Alastair Hanton of Southwark Living Streets, who nominated Clare for the award.

"Thanks to the dogged determination of a few local people, there is now a beautiful new piazza at the junction where the rat-run route began.

"We now have a fantastic new public space where people of all ages from every section of the local community can spend time relaxing and enjoying the trees and the flowers – which they are doing in large numbers."

The piazza was inaugurated with hearty carol-singing at the end of last year. In March guerrilla gardener Richard Reynolds launched his Pimp Your Pavement campaign in the new space.

More recently street artist Morganic has decorated the BT cabinet at the piazza.

Anyone can enter a green corner or nominate one that catches their eye – a garden isn't a requirement. For full details of the Green Corners Awards visit www.conservationfoundation.co.uk

The deadline for July's entries is Friday 30 July.