È10,000 grant for project to get young people into local politics

Rowenna Davis, an SE1 resident who stood as a Labour Party candidate in Cathedrals ward at the local elections, has won a £10,000 grant for a project to encourage more young people to get involved in local politics. 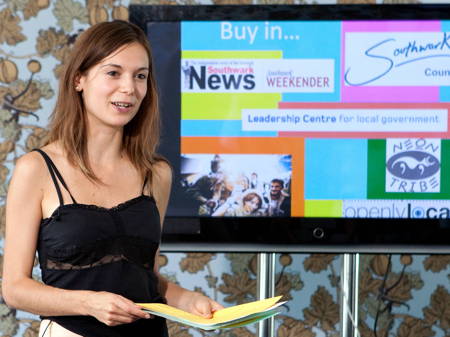 Rowenna Davis pitches her idea to the judging panel

Rowenna was one of 12 finalists in the Internet Explorer 8 Life Academy Awards who battled it out live in front of a judging panel including Professor Robert Winston, entrepreneur and lastminute.com co-founder Brent Hoberman and Countdown mathematician Rachel Riley.

She won the Online Venture Explorer category of the awards which were announced at the end of June.

The 25-year old is a freelance journalist who writes about social affairs and politics for publications such The Guardian and the New Statesman. She is also a regular newspaper reviewer on Sky News's Sunrise programme.

Rowenna, who is the secretary of the Cathedrals and Chaucer Branch Labour Party, received 1841 votes in Cathedrals ward in the elections held on 4 May. She achieved fourth place behind the three elected Liberal Democrat candidates.

In her pitch video for the Internet Explorer 8 Life Academy awards Rowenna explains that young people feel disengaged from local government and local political parties are dominated by a mix of older people and ambitious young political hacks.

"I want to build a website for young people that does three things: first, it gives them a map of their local council area and the ward they are in, tells them who represents them and how to get in contact with them," she explains.

"Second, I want to have an interactive guide to what it means to be a councillor, what they do on a day-to-day basis and what kind of difference they make to young people's lives.

"Third, and most importantly, I want it to be like a kind of councillor match-making service, so young people who are interested in running for local government can go in and follow around councillors who are also interested in taking on new trainees."

Rowenna hopes to have the website up and running within six months, and young people shadowing Southwark councillors in nine months.

"I want to see 25 young people running for local government in 2014 who otherwise would never have considered doing so," she told the judging panel.

Internet Explorer 8 Life Academy Awards celebrate the creativity of the generation who has grown up with the internet and are now coming of age.

Using new media, entrants submitted a two minute video explaining their socially responsible idea and how they propose to take it forward.