Louvres inspired by a Bridget Riley artwork are among the ideas put forward by the shortlisted architects in a competition to design new energy-efficient cladding for the east wing of St Thomas' Hospital. 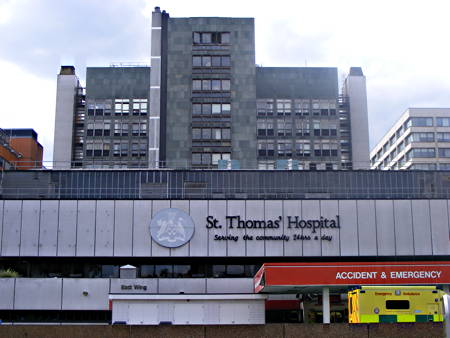 The east wing as it is today 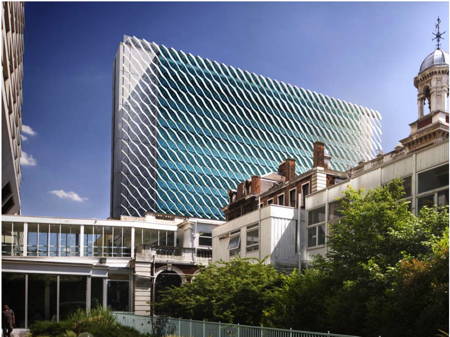 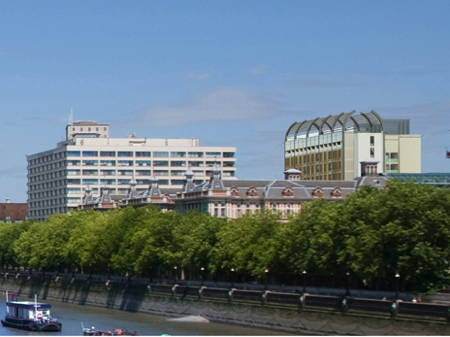 The east wing is a 13-storey 1960s tower which includes more than 200 beds for patients. Guy's and St Thomas' NHS Foundation Trust launched an architectural competition for the recladding of the building to modernise it and improve its energy efficiency.

In May six teams of architects and contractors were shortlisted and their designs have now been put on public display.

Patients and local residents are invited to comment on the six designs at a public exhibition this month. The teams are not identified in the displays and are simply labeled A to F.

Team A say they will create new 'place to pause' for staff and patients, and claim that their prefabricated cladding will not require scaffolding and can simply be craned into place.

Design B is intended to maximise natural daylight by 'designing around the sun' and creating zig-zag bay windows.

Team C propose a translucent white cloak with greenery in the windows and on the rooftop.

Proposal D highlights the possibility of fresh air ventilation and photovoltaic panels on the rooftop. The design is described as 'warp and weft' with an emphasis on horizontal and vertical elements.

A high-performance skin wrapped around the tower 1 metre from the existing facade is proposed by team E. The sun shading on the Archbishop's Park side of the building is said to be influenced by climbing plants such as the clematis, whilst the riverside louvres are inspired by a Bridget Riley painting.

Team F plan to create triangular atria on the eastern side of the building.

The designs are on show in Atrium 1 at Guy's Hospital on Monday 9 and Tuesday 10 August. The exhibition then moves to Central Hall at St Thomas' Hospital from Wednesday 11 to Friday 13 August. The display will be at Durning Library in Kennington on Tuesday 17 and Wednesday 18 August.

The exhibition panels can also be seen on the Guy's and St Thomas' website.