50 years after it first opened, the 13-storey East Wing of St Thomas' Hospital has been given a new glazed cladding. 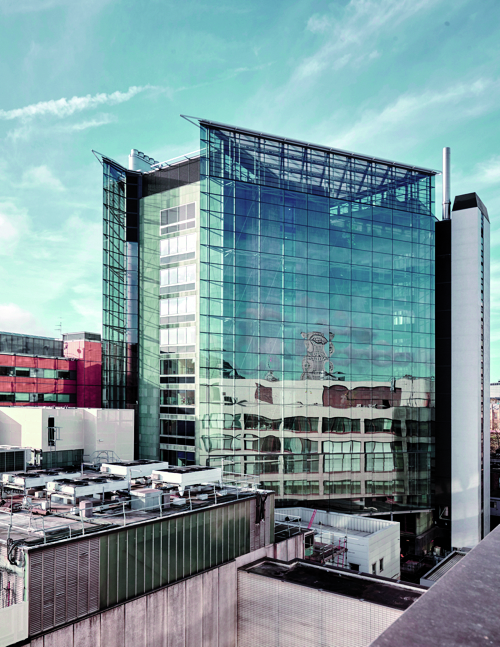 Completion of the redevelopment – first mooted nearly six years ago – was celebrated at an event held at St Thomas' Hospital on Wednesday evening.

Portions of the building have been overclad in a new glazed facade that has both weatherproofed the building and improved its energy efficiency.

Two new lifts have been installed for critically ill patients who need to be transferred from the hospital's A&E department to the intensive care units and inpatient wards.

The interior of the building now includes two airy and light glass atria, which contain eye-catching artwork to improve the hospital environment for patients, visitors and staff.

The art installation – Aquatic Flora I & II by Tsai & Yoshikawa – was chosen by the public and has been funded by Guy's and St Thomas' Charity. It features two large, nine-storey high vertical botanical forms which are artistic alternatives to the fish tanks commonly found in hospital waiting rooms.

"East Wing is home to some of the most important clinical services at St Thomas', caring for some of our sickest patients,' said Steve McGuire, director of Essentia, the estates and facilities division of Guy's and St Thomas'.

"The rationale for the East Wing project was simple – the building was leaking, it wasn't energy efficient, and the lifts to take patients from A&E to intensive care and wards were not fit for purpose, and so a complete overhaul was needed.

"Improving our infrastructure without disrupting patient care is a key priority and we are very proud that the East Wing project was completed without cancelling any appointments or treatment."

Michael Taylor, senior partner at Hopkins Architects, added: "Although it was in a bad state of repair when we started the project, nonetheless the original T-shaped East Wing building was clad with high quality materials – slate, stainless steel, hardwood and ceramic tiles.

"We elected to carefully refurbish these, rather than replace them, and to provide protection from the elements with a new outer skin of glass which we pulled away from the façade to create two new triangular atria.

"Extending the life of the building like this was much more sustainable than a new build and it allowed continued use of the wards, which was of utmost importance to the trust on this tight urban site."