Plans for an LED video installation designed to be viewed from Bankside have been submitted to the City of London Corporation. 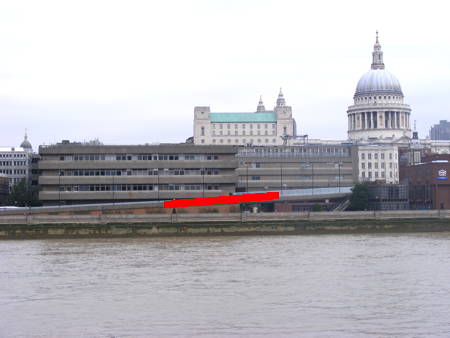 Design firm Neutral wants to install a 1-metre high mesh LED screen on a 24-metre stretch of the concrete balustrade on the south side of White Lion Hill, between Blackfriars Bridge and the City of London School.

The screen is designed to be viewed by pedestrians on the Thames Path at Bankside and the Millennium Bridge, as well as passengers on Thames boats.

Neutral says that the installation, called Flowlight, will be a "soft slow moving light echoing the flow of the river and the city".

The designers say that the light produced will be similar to the purple/blue glow of the Swiss Light that formerly sat at the top of the Tate Modern chimney.

The installation would be switched off between 1am and 7am each day.