Moma: how a Waterloo East breakfast barrow conquered the world

It's more than four years since SE1 resident Tom Mercer swapped his management consultant job in the City for a new life selling healthy breakfasts to commuters at Waterloo East Station. 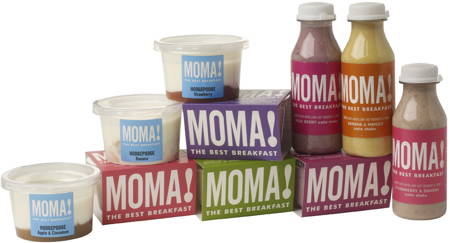 To keep costs low, Moma sells its oat-based breakfast products from small trolleys which can be stored during the day rather than incurring rent on a permanent shop unit.

How did commuters respond to Moma's early breakfast efforts? "The reaction was great," says Tom.

"It really was revolutionary for a lot of people. They realised they could actually get a great-tasting breakfast that was really healthy for them at the same time. And it actually did what we said it would do: fill them up and keep them going till lunchtime."

Moma soon graduated from Waterloo East to mainline stations across London, and now its products are no longer the preserve of rail commuters from out of town.

"We've been selling for several years into a lot of big offices in London, and nationally as well," says Tom. "We also sell into a lot of independent cafes and shops, mainly London-based.

"Aside from that we sell in Selfridges on Oxford Street, we sell in Waitrose throughout the country and we sell on Ocado, the online retailer.

"We do about a thousand products a day for Virgin Atlantic. And most recently we've gone into 34 Sainsbury's convenience stores. Again, around the country from Aberdeen down to London."

Here in SE1 Moma's products can be sampled at Cafe Pronto in Blackfriars Road, Pod at More London and Sainsbury's Local in Waterloo Road.

Although making it into stores like Sainsbury's might be a welcome victory for a small company, doesn't such expansion run the risk of compromising on attention to detail? Not so, insists Tom.

"In terms of the quality of the product, that's absolutely paramount," he says. "I look after the quality directly myself. Every single batch we get produced, I'll test every flavour. We often tweak the ingredients just by fractions of a percent to get it exactly right. It's not an easy thing to monitor. Oats vary a lot in their consistency throughout the season."

With its stalls on mainline station concourses, Moma has been well placed to monitor the effects of the recession on the number of commuters and their spending habits.

Tom says that trade dropped off a bit after August 2008 but things have picked up again recently.

"We charge Ł2 for a breakfast, which is actually really good value when you consider it's the full breakfast and will literally keep people going through until lunchtime," he says.

What's next for Moma? "I really want to push Moma into anywhere that's looking for a premium, healthy breakfast, both in terms of grab-and-go, but also take-home breakfasts," says Tom.

"We're developing a large, big tub. It's cold, you can buy it in supermarkets and put it in the fridge, and you can have it every day for your breakfast."