A light sculpture by Carsten Nicolai could be installed at the top of Guy's Hospital Tower if proposals to re-clad the 36-year-old building get the go-ahead. 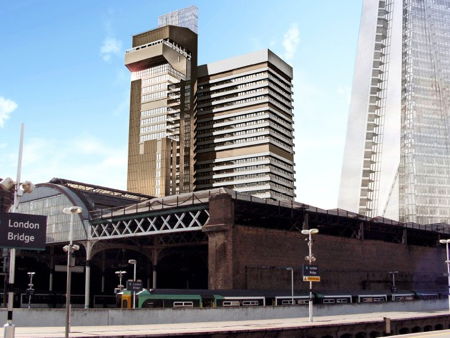 Guy's and St Thomas' NHS Foundation Trust is holding a public exhibition this week to showcase plans by Penoyre & Prasad to give the 34-storey Guy's Tower a new energy-efficient coating.

The high-rise hospital building is divided into two components: a 'user tower' which houses most of the offices, wards and laboratories, and a 'comms tower' which accommodates the lifts, stairs and other central services.

Peynore & Prasad have proposed a new aluminium cladding for the comms tower while the user tower's concrete balconies will be cleaned and new windows fitted.

The scheme is intended to improve the tower's energy efficiency and to spruce up the tired-looking building so that it can hold its own alongside the Shard and other new developments at London Bridge.

The hospital trust hopes to gain planning permission next spring, with the work completed by autumn 2013.

Papers for last week's meeting of the trust's board of governors indicate that the start of the project has been deferred by three months as a cash-saving measure.

To complement the main programme of works, Guy's & St Thomas' Charity has commissioned artist Carsten Nicolai to create a light sculpture to be placed at the top of the tower.

The exhibition includes early drawings for the sculpture which consists of light beams floating between the top of the tower and a new reflective lid.

A neon art installation by Carsten Nicolai was installed earlier this year at the Siobhan Davies Studios near Elephant & Castle.

• The public exhibition of the Guy's Tower proposals can be viewed in Atrium 1 at Guy's Hospital until Sunday 21 November.