Southwark Council has refused permission for a new five-storey building on the site of a Winchester Square warehouse. 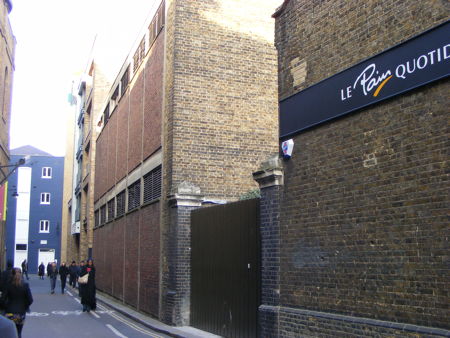 The proposed development would sit between Evans Granary and Blows Yard

The proposal was to demolish the remaining portion of the concrete Pontifex warehouse which has a frontage on Stoney Street and replace it with a building containing a restaurant seating at least 150 diners on two levels and 9 flats on upper floors.

In a surprise move councillors voted unanimously to overturn the officers' recommendation that the development should be allowed. The raft of reasons cited by members included loss of amenity and design and failure to meet local and central government guidlines.

The proposed restaurant, flanked by Pret a Manger at Evans Granary and Le Pain Quotidien at Blows Yard, would have had 7am to 11.30pm opening hours with diners arriving and departing from Stoney Street.

The application was heard at a Borough & Bankside Community Council meeting at Charles Dickens Primary School on Wednesday evening and attracted a number of objections from neighbours in Clink Street.

Local objectors were represented by the architect Graham Morrison who, speaking as a Clink Street resident, claimed that the plans fell short of the criteria for approval.

"In this area you cannot buy toilet paper, a pair of socks or a book," he said.

"The demand for retail has not been properly assessed.

"This large A3 [planning designation] will add to an already intolerable level of nuisance, more loud voices late at night by people leaving premises, slammed doors and engines left running during deliveries. Late at night cabs will use Clink Street as their turning bay and waiting space.

"Stoney Street cannot cope with more service access. It's a single track road often impassable with deliveries to Vinopolis and Pret a Manger ."

Turning to the proposed building, Mr Morrison said that "the design was not good enough". The restaurant entrance was dangerous and an accident waiting to happen as it opened directly on to the road.

He also suggested that it should be more sympathetic to its context rather than out of scale and claimed that the Council had not properly reviewed the design.

"Nowhere do we have a clear view of what the mangement plan is," said Mr Morrison. "But it's us who have to live with this in perpetuity."

Chair Cllr David Noakes suggested that the proposal did not have any unique features to enhance a conservation area and Cllr Tim MacNally thought the quality of design "lacklustre".

Malcolm Pawley, architect for the proposed scheme, said that he had been in the area for 25 years and was aware of concerns over another restaurant opening.

He denied that diners would smoke outside late at night since the management policy forbade it. He saw the restaurant as being "high end" like Roast. However, Cllr McNally feared that after a short time the building could become a Pizza Hut.

"This is not a warehouse," said the architect answering questions about his design. "It responds to adjoining neighbours positively. It's going to be a quality building.

"I don't think it's below standard," added Mr Pawley who runs his practice from Winchester Walk. "It's on my doorstep. We think it's an enhancement of that site."