The pick of this year's best designed buildings, products and projects has gone on show at the Design Museum. 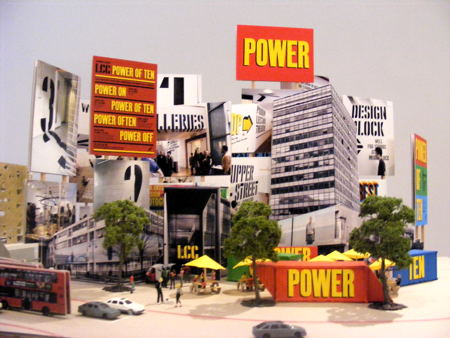 The Brit Insurance Designs of the Year exhibition features all the shortlisted entries for the design awards – which will be announced next month.

One of the more surprising exhibits is a cardboard cut-out model of SE1's very own London College of Communication at the Elephant & Castle.

Morag Myerscough has been nominated in the graphics category for the design of the college's Power of Ten summer show.

Ian Cartlidge, who nominated the project, says that "... LCC have successfully created a street presence on the brutal Elephant & Castle roundabout.

"By populating the small triangular space outside the main entrance with brightly-coloured shipping containers, which function as galleries, tables, chairs and even a cappucino van, Studio Myerscough has created an unexpected, vibrant and social space in an extremely challenging environment."

Also on show are two of Thomas Heatherwick's Spun chairs which proved a hit on the South Bank last autumn during the London Design Festival.

One of the shortlisted entries in the transport category is the Barclays Cycle Hire scheme. Curiously this is credited in the exhibition catalogue as a UK product developed by Transport for London and Serco, with no reference to the Canadian origin of the bikes and docking points which were derived from Montreal's Bixi scheme.

The Mayor of London's transport advisor Kulveer Ranger says that he's perfectly happy to share the credit with the Canadians but insists that there's plenty that's distinctly London about the bikes.

"I visited the manufacturers – Devinci in Bagotville outside Montreal – and they spent a lot of time developing the bike," he told me.

"What we did was evolve the design: we wanted it to be something that was quite unique to London and we wanted to improve on what they had.

"There were over 40 different changes made to the original bike to make the bike that you see on London's streets which we're very proud of."