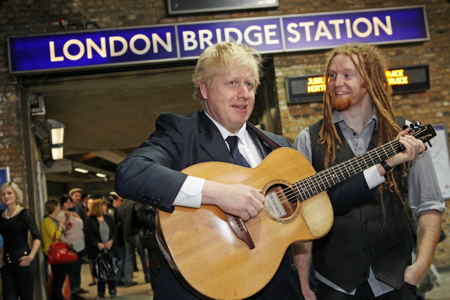 If you are a young musician or singer aged between 16 and 25, the Mayor of London wants to hear from you now.

Entrants to the competition willl compete for the coveted and lucrative prize of a year's licence to busk on the London Underground. Other prizes include a course at the Academy of Contemporary Music, studio time; the opportunity to play live gigs; and a unique London-Paris link up with Eurostar. To be in with a chance you have until 3 April to enter via www.london.gov.uk/rhythmoflondon

Joining the Mayor and Newton were the Lorelles, a three piece girl vocal group, who were finalists in last year's Busking Underground Competition.

Organised by the Mayor in conjunction with London Underground, the busking competition is one of the highlights of Rhythm of London, which puts the spotlight on young musical talent and is part of the Mayor's efforts to increase music education and participation across the capital.

"Whether you want to be a rock star or are a classical prodigy, are electrified or acoustic, if you've got the talent we want to hear from you. In a city of incredible music, Rhythm of London Busking Underground is a brilliant showcase for young musicians from across the capital and might just uncover the next big thing," says Boris Johnson.

Up to 100 of the best entries will be given the chance of a 'Test Run', when they will be filmed performing on busking pitches at Tube stations which form part of the London Underground licensed busking scheme around the capital on Saturday 16 April. A panel of expert industry judges will then select the top 10 acts who will be joined by the Londoners' favourite, as voted for by the public. The final 11 will fight for the top prize at a live busk-off in July.

The Busking Underground 'Tube Test Run' kicks off a week of Rhythm of London events including three lunchtime concerts in The Scoop outside City Hall, an Access All Areas music seminar for young people wanting a career in the music industry, and the St George's Day Concert in Trafalgar Square.

Earlier this year Rhythm of London buskers took part in a series of performances at Canary Wharf, Bank, Waterloo and Liverpool Street to coincide with BBC Radio 3's Mozart season.