Mayor of London Boris Johnson visited London Bridge Station on Tuesday morning to launch a competition to find the capital's most talented buskers. 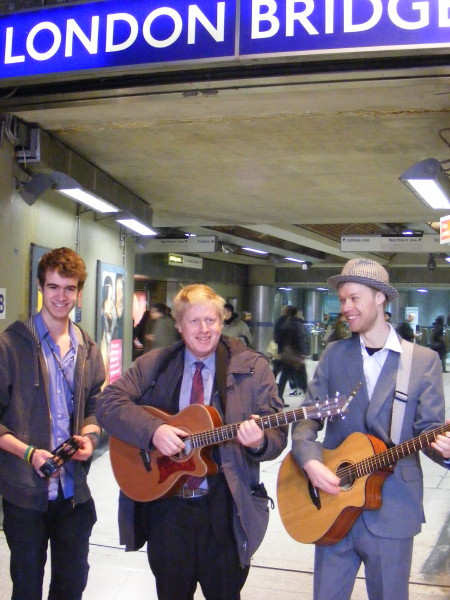 Musicians or singers aged between 16 and 25 are invited to compete for the coveted prize of a year's licence to busk on London Underground. The winner will also receive studio time, live gigs at various venues and musical instruments.

The competition is part of the Rhythm of London campaign organised by the Mayor as part of his drive to increase musical opportunities and education for all young Londoners.

"As The View so purposely said on their album 'Hats off to the Buskers' – it is high time we recognised how marvellous our buskers truly are," says Boris Johnson.

"I'm searching for the finest act to join the myriad of talented musicians on the Underground.

"This is a brilliant opportunity for young people to get their music heard and to practise performing live.

Last year's winner Jamie West strummed orphetic tunes masterfully on his guitar and has proved a popular fixture both on the Tube and the live music circuit. I really look forward to hearing 2010's young Underground star."

23-year-old Jamie West said: "I was overjoyed to win last year and it has really helped springboard my career and get my music out to a whole heap of people. I'm releasing my winning song 'Give Me Everything You Got' on iTunes shortly.

"I'm a huge fan of real live music and thoroughly enjoy playing to live crowds. The highlight for me was playing the O2 in front of hundreds of people – an unforgettable moment."

To enter the competition musicians have to upload a video clip of themselves performing on the 'Rhythm of London' YouTube group www.youtube.com/group/SOTUauditions2010 and complete an online registration form at www.london.gov.uk by 6 April 2010.

Judges will then select 100 people to be filmed performing at busking slots across the capital on April 24th and ask the public to vote for their favourite busker. The top ten will then perform live later this year at a 'busk off' for the final prize.